There are different kinds of cancer treatment such as surgery, radiotherapy, and chemotherapy, The treatment is used to remove cancer cells or destroy them with medicines or by other means, some common cancers are easier to treat and cure if they are found out early, and the treatment of cancer will be difficult when cancer spreads.

Surgery is the way to physically remove cancer, It can be very successful in treating some types of cancer but it is not an option in all cases if cancer is in the form of a malignant tumor (the tumor that spreads), but the tumor that is in one place (localized), The tumor and any surrounding affected tissue can be safely removed.

Surgery may not be possible if cancer has spread to the other areas of the body or if the tumor can not be removed without damaging the vital organs such as the liver or the brain, There are different types of surgery that are used to remove cancer, Some of them are Laser surgery, Laparoscopic surgery, Mohs’ surgery, and Cryosurgery.

In Laser surgery, The beams of light and sometimes the heat from the laser are used to target and destroy the cancer cells, In Cryosurgery, The cells of cancer are frozen and destroyed by using a very cold material such as liquid nitrogen. 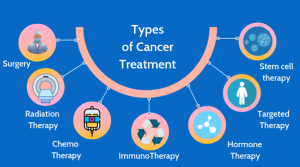 In Laparoscopic surgery, small incisions are made in the body and a tiny camera is used to see inside your body, The camera sends the signals to a video screen so that your doctor can see the tumor and your organs, and the surgical tool is used to remove the tumor.

Radiotherapy uses radiation in the form of a special kind of X-ray, gamma rays, or electrons to damage cancer cells, It does not cause pain, Depending on the area that is treated, The side effects from the radiation damage to the normal tissues may occur.

Radiotherapy is sometimes the only treatment needed or it may be used with the other therapies, The surgery, and the radiotherapy may be used for the tumors that grow in one place, Radiation treatment can be given separately or before or after the surgery and chemotherapy.

The radiation therapy can be external, So, It is given by the machine outside of the body or it can be internal, So, The small particles containing the radioactivity are implanted near the tumor.

Chemotherapy uses medicines to attack cancer cells, It causes a lot of fear to people because it causes many severe side effects, It is used when cancer spread to other areas of the body, It can be used in combination with surgery and radiation, The tumor is surgically removed and then the chemotherapy is used to kill any remaining cancer cells.

There is another kind of treatment that is biological therapy (It is also called immunotherapy), It is used to trigger the immune system to produce more white blood cells, It is called lymphocytes, It can be used in the combination with surgery, radiation therapy, or chemotherapy.

Hormone therapy is used to treat breast or prostate cancer, It is often in addition to chemotherapy or radiotherapy, Hormone therapy involves taking drugs that contain other hormones to block the effects of estrogen and testosterone, also hormones.