The functions of the spinal cord are transmitting the nerve impulses for movement, sensation, pressure, temperature, pain, and more, The spinal cord transmits nerve signals from the motor cortex to the body, and from the afferent fibers of the sensory neurons to the sensory cortex, It is a center for coordinating many reflexes and it contains reflex arcs that can control reflexes.

Physiology of the spinal cord

The spinal cord is the location of groups of spinal interneurons that make up the neural circuits known as central pattern generators, These circuits are responsible for controlling motor instructions for rhythmic movements such as walking.

Functions of the spinal cord

The spinal cord has the following functions:

Physiology of the motor descending tracts

The motor descending tracts can be functionally divided into two major groups: 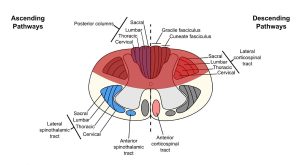 Axons of the corticospinal tract leave the cerebral cortex in the fan-shaped corona radiata and then they narrow as they descend to pass through the internal capsule, and then continue their descent through the ventral part of the midbrain, pons, and medulla.

In the medulla, the fibers collect forming the medullary pyramid. In the lower medulla, 80% of the fibers cross to the opposite side. (motor decussation) and continue in the contralateral side of the spinal cord forming the lateral (crossed) corticospinal tract terminating on the alpha motor neurons reaching distal muscles contralaterally and are involved in controlling skilled movements.

The remaining (20% of the fibers descend on the same side of the spinal cord forming the ventral (uncrossed) corticospinal tract, but about 14% of these fibers cross to the contralateral side only at the segmental level where they terminate on alpha motor neurons supplying proximal and axial muscles.

The corticobulbar tracts originate from the face motor area and descend as collaterals from the corticospinal tract to supply muscles of the face, head, and neck. Corticobulbar fibers terminate on the brainstem motor nuclei bilaterally except the lower part of the facial nucleus and hypoglossal nucleus which receive fibers only from the opposite side.

The corticobulbar fibers which supply the extraocular muscles originate from the frontal eye field area and terminate on the motor cranial nerve nuclei III, IV, and VI cranial nerve and are termed corticonuclear tract.

Effect of lesion of pyramidal tract

Strokes of the motor cortex or corticospinal tracts are common. Their immediate consequences are paralysis of the fine movements on the contralateral side.

These tracts are divided, based on their location in the brainstem into:

It originates from the red nucleus of the midbrain, The axons of these neurons cross the midline in the midbrain and descend to the contralateral spinal cord. They terminate mainly on interneurons in the cervical cord which in turn project to the alpha motor neurons for control of distal limb muscles (flexor muscles of the arm and forearm but not of individual digits).

Function: the function of this tract is to facilitate limb flexors.

It originates from the superior colliculus in the midbrain. The axons of this tract cross the midline and descend in the anterior part of the spinal cord to terminate at cervical segments.

Function: this tract is excitatory to neck extensors, to control of postural reflexes by directing head movements in response to visual and auditory stimuli.

It originates from the inhibitory (medullary) reticular formation of the brainstem and terminates at all levels of the spinal cord mainly on the opposite side on the gamma motor neurons.

Function: it inhibits the tone of extensor muscles (axial and proximal limb muscles).

It originates from the facilitatory (pontine) reticular formation in the brainstem, descends on the same side, and terminates at all segments of the spinal cord mainly on the gamma motor neurons.

Function: it facilitates muscle tone of the antigravity and extensor muscles to maintain the body posture against gravity.

This tract arises from neurons of the lateral vestibular nucleus in the pons, the fibers in this tract are uncrossed and descend the entire length of the spinal cord.

Function: it activates the alpha motor neurons innervating extensor muscles of the trunk and ipsilateral limb to maintain the upright posture.

This tract arises from the medial vestibular nuclei in the medulla and pons, descends in the cervical spinal cord, and terminates on the alpha motor neurons that innervate neck and upper limb muscles.

Function: the main function of this tract is to adjust the position of the head in response to vestibular stimuli.