The continuous expansion of the cosmic space is due to the movement of galaxies apart, Planets revolve around the Sun in fixed orbits, The stability of the Earth rotation in an orbit around the Sun due to the Sun gravity, There are many scientific and philosophical theories about the evolution of the solar system, They are about twenty theories, and they are still unproved & subjected to change.

In 1796, the French scientist Pierre Simon Laplace published research entitled World order, This research included a perception of Laplace about the evolution of the solar system, This perception has been affected by two observations, which are:

It assumed that the origin of the solar system was the nebula, and the three phases of nebular theory:

Nebula is a glowing gaseous sphere revolving around itself, from which the solar system was originated. The nebula lost its sphere form and became in a form of a flat rotating disk due to the effect of centrifugal force that is resulted from the rotation of the nebula around itself. 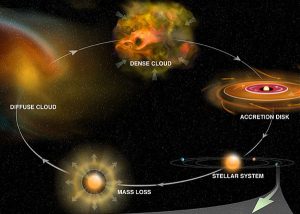 Assumptions of the crossing star theory: It assumed that the origin of the solar system was a big star which is the Sun.

The Sun escaped from the gravity of the huge star in the crossing star theory due to the explosion in the expanded part of the Sun that faces the huge star.

Fred Hoyle builts his theory on the origin of the solar system on the basis of a well-known astronomical phenomenon known as Stars explosion phenomenon.

Glowing of a star for a short time to become one of the most shining stars in the sky, then its glowing disappears gradually to return as it was. The interpretation of this phenomenon is not known specifically until now, the following is an attempt to interpret this phenomenon:

It assumed that the origin of the solar system was a star rather than the Sun.

The explosion of some stars suddenly due to the occurrence of sudden and violent nuclear reactions.

Astronomers use special equipment centered on the Earth as the solar telescope to study the Sun, or carried into space as Hubble telescope.

Importance of solar telescope: It forms a complete picture of the Sun.

How does the solar telescope work…?

The Hubble telescope was launched in April in 1990, and it rotates around the Earth at a height of 500 km.

It collects photos of the universe that give us details about its state since millions of years, these photos give astronomers an opportunity to study the evolution of the universe after the Big Bang.