Stages of the origin of the universe since Big Bang & how did big bang create life?

Big Bang is a massive explosion that happened, since 15000 million years, resulting in it all the forms of matter, energy, and time, It is the expansion of the universe and merging of atomic particles forming helium and hydrogen gases.

How did the universe originate?

There was no one to relate what happened but the discoveries in physics and astronomy enabled scientists to trace the history of the universe from the first-second fraction of its evolution.

Many scientists believe that the universe emerged from a massive explosion called Big Bang, They believe that before the explosion, The universe’s matter was a gaseous ball of high pressure, high temperature, and small in volume, It is in constant expansion.

Since about 15000 million years, the universe was very small and very hot, due to the explosion, all forms of matter, energy, space, and time resulted in it. 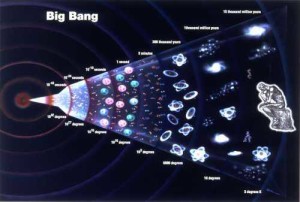 Through Big Bang, the process of expansion and changing of the gaseous ball components started and it continues to this day, through 1 second after the explosion, The temperature decreased to about 10000 million (10 billion) degrees.

Within minutes after the explosion, The atomic particles produced from the explosion merged together producing gaseous clouds of hydrogen and helium with a ratio of 75 %: and 25 % respectively. After 1000 million (1 billion) years from the Big Bang, The gaseous clouds merged to form the masses that will produce the matter of the galaxies.

After 15000 million (15 billion) years from the Big Bang, The Universe as it is now, In 1964, scientists discovered radio waves that come from space, They concluded that these waves are a type of echo coming from the Big Bang, TV sets can receive such signals on the Earth.

What is the future of the Universe?

Universe Expansion and measuring the distances through the universe