Evolution of the Solar System, and stages of Solar Nebular theory

Astronomers think that the most widely accepted model for explaining the evolution and formation of our solar system is ” the Solar Nebular Model ” which states that the planets and other bodies were originated in the solar system from the matter that remained from the evolution of the sun.

the Sun was surrounded by a Solar nebula which is a sphere of gases (a mixture of hydrogen and helium) and dust (iron, rocks, and ice), The solar nebula started to rotate, During the rotation, It turned into a flat rotating disk.

Most of the dust compressed forming four masses (four planets) which are Mercury, Venus, Earth, and Mars, Some dust and ice combined with gases forming other four planets which are Jupiter, Saturn, Uranus and Neptune in an external further zone.

The solar nebula is a sphere of gases and dust from which the planets of the solar system were originated.

There are many scientific and philosophical theories about the Evolution of the solar system, They are about twenty theory, Those theories are still unproved and subjected to change. 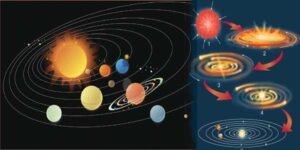 Later, in 1796, the French scientist Pierre Simon Laplace published research entitled World order, The research explicated the perception of Laplace about the evolution of the solar system.

This perception (which won a great reputation for a century) has been affected by two observations which are there is something which looks like the clouds or nebula in space, The apace contains many cloudy rings surrounding some planets such as the rings of Saturn planet.

In the Nebula phase (glowing gaseous sphere), over time, The nebula lost its heat gradually so its size contracted and its revolving speed around itself increases.

In the gaseous rings phase, The nebula lost its spherical shape and become in a form of a flat rotating disk under the effect of the centrifugal force, Parts got separated from the flat rotating desk to form gaseous rings that also rotate in the same direction in which the nebula rotates.

Stages of the origin of the universe since Big Bang & how did big bang create life?