The thermosphere layer is the layer of the Earth’s atmosphere directly above the mesosphere and below the exosphere, within this layer of the atmosphere, ultraviolet radiation causes the photoionization/photodissociation of molecules, creating ions in the ionosphere.

The thermosphere layer begins at about 85 km above sea level, At these high altitudes, the residual atmospheric gases sort into strata according to molecular mass, Thermospheric temperatures increase with altitude due to the absorption of highly energetic solar radiation.

Temperatures are highly dependent on solar activity and can rise to 1,700 °C or more, Radiation causes the atmosphere particles in this layer to become electrically charged (see ionosphere), which enables radio waves to be refracted and thus be received beyond the horizon.

Dynamics of the thermosphere are dominated by the atmospheric tides, which are driven by the very significant diurnal heating, The Atmospheric waves dissipate above this level because of collisions between the neutral gas and the ionospheric plasma.

The ionosphere layer is a layer that contains charged ions, and it has an important role in wireless communications and broadcasting as it reflects the radio waves that transmitted by the radio stations and the communication centres.

The ionosphere layer is surrounded by two magnetic belts which are known as Van- Allen belts. These belts play an important role in the scattering of the harmful charged cosmic radiations away from the Earth. This scattering causes the occurrence of the Aurora phenomenon, Van- Allen belts are called by this name related to the scientist Van-Allen who discovered them.

The Aurora phenomenon appears as brightly coloured light curtains seen from both poles (the North and the South Poles) of the Earth.

The occurrence of the aurora phenomenon is due to the scattering of harmful charged cosmic radiations away from the Earth by Van-Allen belts. 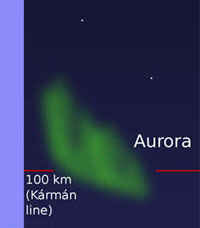 The atmospheric envelope is inserted with the outer space in a region known as the Exosphere, in which the satellites orbit around the Earth with cameras and a telescope, The satellites are used to transmit weather condition information and TV programs.

The characteristics and the importance of the mesosphere layer

The characteristics and the importance of the troposphere layer

The characteristics and the importance of the stratosphere layer