Components of the Earth’s crust

Rock is a natural solid material, that exists in the Earth’s crust and it is formed of one mineral or a group of minerals. It is a lower layer of the Earth’s crust beneath the soil. and it consists of different types of rocks.

The plant roots extend easily through the upper part of the Earth’s crust but can’t extend through its lower part because the upper part is fragmented and loosened layer but the lower part is a solid material, that consists of different types of rocks. 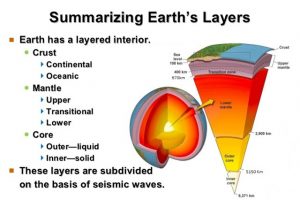 Components of the Earth’s crust

Rocks are classified according to their way of formation into three groups, which are Igneous rocks, Sedimentary rocks, and Metamorphic rocks.

The outer core of the Earth contains molten metals, which are known as magma. Magma is a very hot thick (viscous) liquid underneath the Earth’s crust. When a volcano occurs, the magma at the bottom of the Earth’s crust is pushing upwards. A part that fills some gaps and cracks of the Earth’s crust and the other part is extruded from the crater of the volcano to the surface of Earth in the form of volcanic flows, which is known as lava.

Igneous rocks can be divided according to the site (place) of their formation in proportion to the Earth’s surface into two main divisions, which are: plutonic rocks and surface or volcanic rocks.

The magma at the depths of the Earth’s crust gets cool slowly, therefore the minerals that form these rocks take a long time to crystallize, so their crystals are large-sized. Plutonic rocks have coarse texture because the size of crystals of minerals forming them is large. They are formed in the depth of the Earth’s crust, where the minerals accumulate forming huge masses of rocks covering wide areas.

The lava cools quickly on the surface of the Earth’s crust, therefore the minerals that form these rocks take a short time to crystalline, so their crystals are small-sized. Surface or volcanic rocks have smooth texture because the size of crystals of minerals forming them is small.

Volcanic rocks are formed over the Earth’s surface, where the minerals accumulate forming a flow of lava around the sides of the volcano. Volcanic rocks contain small circular holes due to the extruding of gases from volcanic flows during their cooling and formation of rock.

Granite is a plutonic igneous rock, It is pink or grey. The crystals of minerals forming it are big (can be seen by the naked eye). Granite is heavy. It has a rough texture. It is solid, cohesive and it isn’t easily broken. It is found in the Eastern Desert and the Sinai Peninsula. It consists of 3 main minerals, which are Quartz, Feldspar, Mica (Dark mica and Light mica).

Basalt is a volcanic igneous rock, It is dark-colored, The crystals of minerals forming it are small (can’t be seen by the naked eye). Basalt has small circular holes. It has a smooth texture. It is extremely hard. It is found in Egypt in Abou-Zaabal, El-Fayoum and Near Abou Rawash. It consists of 3 main minerals, which are Olivine, Feldspar, and Pyroxene.

The cohesion of layers of sedimentary rocks increases by passing time because the sediments of the bottom layers are exposed to high pressure resulted from the weights of the deposits above them, this causes a decrease in the ratio of water existing between the grains.

How can you differentiate between sandstone and limestone?

When calcium carbonate precipitates in lime solutions, Limestone is formed. Effervescence takes place when hydrochloric acid is added to a sample of limestone due to evolving of carbon dioxide gas.

When old rocks (igneous or sedimentary) are subjected to pressure and high temperature, they convert into metamorphic rocks. This conversion often depends on the type of rock that surrounds the magma, the mass of magma and its temperature. Metamorphic rocks are rocks originated as a result of exposing the old rocks (igneous or sedimentary) to the factors of pressure and high temperature.

Marble is produced from the conversion of limestone. It has more solidity and it is cohesive than the limestone. Its texture is coarse (rough). Its colour is white if it is pure and has other colours when it contains impurities.