Chlorofluorocarbon compounds are dangerous to the environment because they cause erosion of the ozone layer and global warming phenomenon. There are two dangerous phenomena that have faced the Earth since the mid-twentieth (20th) century. These two phenomena are the Erosion of the ozone layer phenomenon (which occurs in the stratosphere). Global warming phenomenon (occurs in the troposphere).

Erosion of the Ozone layer phenomenon

Structure of the Ozone layer

The Ozone layer is composed of ozone gas (O3) which consists of three oxygen atoms.

Formation of the Ozone layer

Location of the ozone layer

The ozone layer extends from 20 km to 40 km of height above sea level in the stratosphere layer because the stratosphere layer is the first layer in the atmosphere which contains a suitable amount of oxygen gas, that faces ultraviolet radiations emitted from the Sun. Ozone gas has a faint blue colour and a distinct smell. It can be observed near instruments that contain electric discharge pipes as in the cases of light photographic machines and TV sets.

The thickness of the ozone layer

If it were subjected to the ordinary temperature and normal atmospheric pressure which is known as (STP) [STP means standard temperature (0°C) and pressure (1013.25 Mb)]. Accordingly, Dobson assumed that the normal degree of ozone is 300 Dobson (where each 1mm thickness is equivalent to 100 Dobson). [The degree of ozone is measured by the Dobson unit.

Importance of the Ozone layer

There are three types of UV rays that differ in wavelength and range of penetration through the ozone layer:

The ozone layer acts as a protective shield for living organisms because it doesn’t allow penetration of all far and most of the medium ultraviolet radiations which have harmful chemical effects and threaten the life of living organisms. Ultraviolet radiation with a wavelength close to the visible light penetrates the atmosphere and reaches the Earth’s surface where it helps in the synthesis of vitamin (D) in the bodies of the newly born babies.

Erosion of the ozone layer

Pollutants of the ozone layer

To protect the ozone layer, We must reduce the use of chlorofluorocarbon compounds and find safer alternatives, Stopping manufacturing of the ultrasound Concorde aeroplanes because their exhausts contain nitrogen oxides that affect the ozone layer.

Factories should stop their production of foam boxes to reduce the use of chlorofluorocarbon compounds as they are used in making foam backing. Scientists ban using freon as a cooling material because freon causes erosion of the ozone layer and global warming phenomenon.

Reasons for the global warming phenomenon 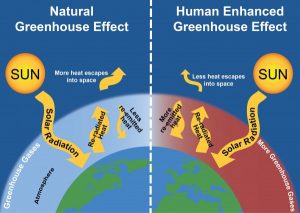 Interpretation of the greenhouse phenomenon

When the rate of greenhouse gases increases in the troposphere, some of the infrared radiation cannot penetrate the atmosphere because it has a long wavelength, So it is kept trapped in the troposphere causing the rise in the planet Earth’s temperature which is known as the Greenhouse effect.

Greenhouse gases are considered as a blessing that can be changed into a catastrophe, where without these gases, the temperature of the Earth would have decreased to -18°C and the increase in its concentration in the atmosphere will lead to environmental disasters.

The negative effects of the global warming phenomenon

Among the most dangerous consequences of raising the temperature of Earth planet due to global warming phenomenon are melting the snow of the two poles, and severe climate changes.

Melting the snow (ice) of both south and north poles

Melting the polar ice would increase the level of seas and oceans, which leads to:

Global warming phenomenon seriously affects the life on poles, because it causes melting of the snow of both south and north poles which would increase the level of sea and oceans.

Among these features is the repeated occurrence of