The universe is a wide and extended space that contains all the galaxies, the stars, the planets, the moons, the living organisms, and everything, The universe is very vast, The Sun and the earth are tiny parts in the universe, And It contains about 100000 million galaxies.

The Galaxies are groups of stars that rotate together in the cosmic space by the effect of gravity, They are bigger (or structural) units of the universe.

Each galaxy has a distinctive shape according to the harmony and order of the groups of stars in it, The Galaxies gather in clusters, The Galaxies Clusters are groups of galaxies in the space, The galaxy to which our solar system belongs is Milky Way galaxy.

Milky Way galaxy contains all the stars we see at night in the sky, and It is given that name because it appears in the sky at night as splashing milk or spreading straw. 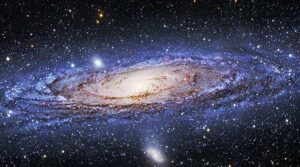 In Milky Way Galaxy, The old (large) stars gather in the center, The recent small stars are located in the spiral arms of the galaxy, The Sun is a star of millions of stars that rotate around the center of Milky way galaxy.

The Sun takes about 220 million years to complete one rotation around the centre of the galaxy, The Earth is one of the planets that rotate around the Sun, and it is the planet of life.

The distance between the stars is very large, So, the distances in the far space are not measures in kilometers but they are measured in a unit called Light year.

The distance between the galaxies increases as time passes as the galaxies move away in the cosmic space, And this is known as the Expansion of the Universe.

The cosmogony in ancient times

In ancient civilizations, Their relationship with the world of multiple gods and their deep belief that there is a fundamental difference between the earth and heaven did not allow them to develop theories about the universe and its origin.

In the Stone Age, the first human perception of cosmogony was put, where Myths dominated the human imagination, The ancient Egyptians and Babylonians assumed that there was a relationship between the eternal universe and the multiple Gods controlling it.

At both the Indian and Chinese civilizations, The astrology prevailed, Philosophers of Greeks and Romans put theories about the cosmic phenomena.