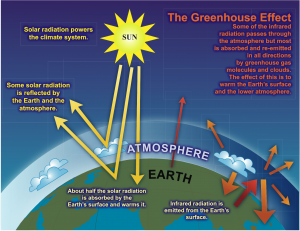 The temperature of the planet Earth has been increasing since 1935 due to the increase of greenhouse gases.

The most important greenhouse gases

Carbon dioxide gas  (The ratio of carbon dioxide gas increased in the atmosphere to 0.038 % in 2005 after it was 0.031 %), Methane gas, Water vapour, Nitrous oxide, and Chlorofluorocarbon compounds.

What are the reasons for the increasing carbon dioxide gas ratio in the atmosphere?

The increase in carbon dioxide gas is due to forest fires, fossil fuel burning, and cutting the of trees.

When the concentration of greenhouse gases increases in the atmosphere, the atmosphere plays the role of the glass in the greenhouse, Where it permits the visible light and the short-wave rays which produced by the Sun to pass.

The Earth and its components absorb these rays and re-emit the radiation back in the form of infrared radiation which can not penetrate the atmosphere as it has a long wavelength.

So, It is kept trapped in the troposphere layer causing the rise of the planet Earth’s temperature.

The most dangerous consequence of global warming is the melting of the snow of the two poles which increases the sea level in the seas and the oceans, It threats the coastal areas as they could drown, and causes the extinction of some polar animals like the polar bear and the seals.

How to overcome global warming

The bad destructive effects of global warming made the representatives of 160 nations in Kyoto, Japan in 1997 to sign a protocol called Kyoto Protocol which suggests reducing the ratio of the bad emission by cutting down the consumption of fossil fuels and searching for environmentally friendly alternative energy resources.