What is brain cancer?

Brain cancer is the disease of the brain in which the cancer cells (the malignant cells) arise in the brain tissues, The cancer cells grow to form a mass of cancer tissue (tumor) that interferes with the brain functions such as the muscle control, the sensation, the memory, and other normal body functions.

The brain tumor or the intracranial neoplasm occurs when the abnormal cells form within the brain, There are two main types of tumors which are the malignant or the cancerous tumors and benign tumors. 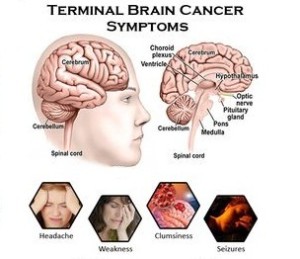 The malignant tumors can grow and spread aggressively, They can also spread to the distant parts of the body, Like all the cells of the body, The tumor cells need the blood and the nutrients to survive.

What are grades of brain cancers?

Not all the brain tumors are alike, even if they arise from the same type of brain tissue, The tumors are assigned a grade depending on how the cells in the tumor appear microscopically.

The headaches are the first symptom of the brain tumor, The headaches can be mild, severe, persistent, or come and go, There are symptoms include the difficulty in speaking or remembering words, hearing, smell or taste.

The symptoms include seizures, severe (a convulsion) or mild (as in the fleeting disturbance of the awareness, the sensation or the jerking muscles), the weakness or paralysis in part of the body, loss of balance, general irritability, drowsiness or a change in personality.

The diagnostic tests for the brain cancer involve the history, the physical exam, and usually, a CT or MRI brain imaging procedure, and the brain tissue biopsy is done to determine the extent of cancer (its stage).

The brain tumors are graded on a scale of I to IV, based on how quickly they are growing and their ability to invade the nearby tissue, grades I and II are the slowest growing and they are called low-grade tumors, and grade IV is the fastest growing.

The treatments are directed by a team of doctors and they are designed for the individual patient, The treatments may include the surgery, the radiotherapy, or the chemotherapy, or steroid therapy or a combination of these treatments, Some tumors can be removed completely by surgery (craniotomy).

Side effects of Chemotherapy after the surgery to remove cancer