Carbohydrate metabolism is responsible for the metabolic formation, breakdown, and interconversion of carbohydrates in living organisms, It ensures a constant supply of energy to the living cells, The most important carbohydrate is glucose, glucose can be broken down via glycolysis, It enters into the Kreb’s cycle & oxidative phosphorylation to generate ATP.

Fates of the absorbed monosaccharide

Glucose, fructose, galactose, and other monosaccharides are absorbed through portal blood to the liver. Fructose is either oxidized or converted to glucose in the liver, while galactose is converted to glucose. The only sugar circulates in the blood is glucose. Part of this glucose is used in the liver to be stored as glycogen, oxidized or used in lipid synthesis. Another part passes through systemic circulation to maintain blood glucose level (the fasting blood glucose level 70-110 mg/dl).

Glucose is used intracellular in:

Oxidation: The pathways for oxidation of glucose are:

Conversion to biologically active substances as:

Storage of glucose as:

Excretion of glucose in urine: When blood glucose level exceeds the renal sugar threshold (180 mg/dl), it passes to urine. This is known as glucosuria. 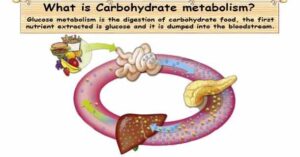 It is the degradation of glucose to generate ATP and to provide intermediates for other synthetic and metabolic pathways. Aerobically it ends with pyruvate while anaerobically lactate is the end product.

It occurs in the cell cytosol of all tissues. It is the principle route for glucose metabolism and the main pathway for the metabolism of fructose and other carbohydrates derived from the diet.

Conversion of glucose to G-6-P by hexokinase or glucokinase.

For tissues that have mitochondria, glycolysis is considered a preparatory step for complete oxidation via the citric acid cycle. The hydrogens of NADH produced by glycolysis are transported to the mitochondria to be oxidized by electron transport chain (ETC).

Pyruvate is reduced to lactate in a reversible reaction catalyzed by lactate dehydrogenase (LDH). This reaction provides oxidized NAD to insure the continuation of the pay off phase of glycolysis and production of the 4 ATP molecules at the substrate level.

This occurs in muscles during severe exercise, and hypoxic conditions, and in tissues that lack mitochondria as RBCs and lens. The decrease in the amount of O2 will necessitate an increase in anaerobic glycolysis for the energy production, leading to the generation of a large amount of lactic acid. Lactic acid diffuses to the circulation and taken by:

Cori cycle: Lactate which is formed during anaerobic oxidation of glucose in muscles and in RBCs diffuses to the blood then to the liver. In the liver, lactate can be converted to glucose by gluconeogenesis, Glucose goes back to tissues and is reutilized for the production of energy.

Importance of glycolysis in red cells

The rate of glycolysis is regulated by the activity of the three irreversible enzymes, hexokinase, PFK, and pyruvate kinase. PFK is the main pacemaker, since it catalyzes the first irreversible reaction unique to the glycolytic pathway (the committed step). PFK is allosterically inhibited by high levels of ATP (high energy state of the cell) and citrate (substrate feedback inhibition). It is allosterically activated by elevated levels of AMP (low energy state of the cell), and F-6-phosphate (substrate activation).

Glucagon is secreted in hypoglycemia or in carbohydrate deficiency. It affects liver cells mainly as follows:

Insulin is secreted in hyperglycemia and after carbohydrates feeding, it causes:

Arsenate is an uncoupler of oxidation and phosphorylation, it forms 1-areseno-3-phosphoglycerate which interferes with ATP formation at a substrate level, but it does not prevent flux through glycolysis. Arsenate competes for inorganic phosphate binding sites on enzymes, resulting in the formation of arsenate esters which are unstable.

Pyruvate is transported to the mitochondria via a special pyruvate transporter where it can be transformed into Acetyl Co-A by oxidative decarboxylation catalyzed by a multi-enzyme complex known as pyruvate dehydrogenase complex. This reaction needs five cofactors which are: thiamine pyrophosphate (TPP or active vitamin B1), lipoic acid (L), coenzyme A (CoASH) FAD and NAD+. It provides extra 6 molecules of ATP formed by oxidation of 2 molecules NADH by the ETC.

Regulation of the activity of the pyruvate dehydrogenase complex

Arsenite and mercury inhibit pyruvate dehydrogenase complex by reacting with the sulphhhydryl group of lipoic acid leading to the accumulation of pyruvate and formation of lactic acid & lactic acidosis.