White blood cells have nuclei, which distinguishes them from the other blood cells, the anucleated red blood cells (RBCs) and platelets, WBCs are also called leukocytes or leucocytes, they protect the body against both infectious disease & foreign invaders, they are derived from multipotent cells in the bone marrow known as hematopoietic stem cells, Leukocytes are found throughout the body, including the blood and lymphatic system.

White blood cells are classified in standard ways, two pairs of broadest categories classify them either by structure (granulocytes or agranulocytes) or by cell lineage (myeloid cells or lymphoid cells), They can be divided into the five types which are neutrophils, eosinophils (acidophiles), basophils, lymphocytes & monocytes. Monocytes & neutrophils are phagocytic. 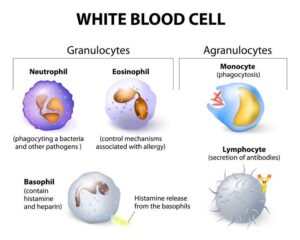 Monocytes are so-called because they have a single, non-segmented nucleus. They constitute about 3-8 % of the total leukocytic count.

Monocytes stay in circulation for only a few days, they then migrate to the different body tissues. There, they can differentiate to specific tissue macrophages that constitute the mononuclear phagocytic system that includes: Macrophages in connective tissue, Osteoclasts in bone, Microglia in CNS, Von Kupffer cells in the liver, In chronic infections, macrophages fuse with one another, forming multinucleated giant cells.

It is the formation of granular leukocytes, including neutrophils, eosinophils, and basophils, in the bone marrow. Granulopoiesis passes through the following common stages:

Types and functions of lymphocytes

It is the formation of lymphocytes. It takes place in the primary lymphoid organs (bone marrow and thymus). It passes through the following stages: