The immune system is responsible not just for defending the body against infection, but also against cancer. Unfortunately, an active immune system also increases the risk of rejection following organ transplants, and therefore immunosuppressive drugs often have to be administered to prevent rejection.

The function of the immune system is to protect the body from invasion and damage by different antigens, which can be microorganisms (bacteria, viruses, or fungi), toxins, and malignant cells. There are three main lines of defense mechanisms:

In humans, these provide the first line of defense. They include:

When such defenses fail, the two other types of defense mechanisms are activated. 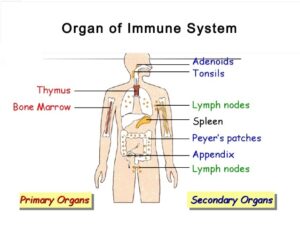 Cells of the immune system

Morphologically, all lymphocytes are similar in either light or electron microscope. They can be distinguished into 3 different types by immunohistochemical methods as each type exhibits specific surface markers or surface receptors.

These originate in the bone marrow and migrate to the thymus where they proliferate, mature, and acquire T cell receptors (TCR) on their surface specific for certain antigen recognition. T cells subsequently migrate to the peripheral lymphoid tissues (lymph nodes, spleen, and Peyer’s patches in the ileum) where they come into contact with the antigens. When they are activated by the specific antigen, they proliferate and differentiate into four functional subtypes of T cells (cell-mediated immune response), these are:

These originate in the bone marrow where they proliferate, mature, and acquire surface membrane immunoglobulins (slgs) receptors specific for certain antigen recognition. B cells subsequently migrate to the peripheral lymphoid tissues where they come into contact with antigens. When they are activated by the specific antigen, they proliferate and differentiate into:

These lack the surface markers characteristic of B and T cells. They act non-specifically to kill virally-infected cells and malignant cells. Antigen-presenting cells (APCs) originate from the bone marrow and are found in most tissues. They interact with T lymphocytes to stimulate the immune response. They include Macrophages, Langerhans cells of the skin and oral cavity, B lymphocytes, Epithelial reticular cells of the thymus.

Neutrophils are mature cells that can attack and destroy foreign agents even in the circulating blood (microphages). In contrast, blood monocytes are immature cells that have very little ability to fight infectious agents. However, once monocytes enter the tissues, they begin to swell and numerous lysosomes develop in the cytoplasm, giving it the appearance of a bag filled with granules. These cells are now called macrophages, and are extremely capable of combating disease agents inside the tissues.

Defensive properties of neutrophils and monocyte-macrophages

Neutrophils and monocyte-macrophages have special properties that help them perform their defense function. These properties include:

The invasion of the body by bacteria triggers the inflammatory response. Many different chemical substances in the tissues cause both neutrophils and monocytes to move towards the source of the chemicals. This phenomenon is known as chemotaxis. Chemotactic substances include some of the bacterial toxins, degenerative products of inflamed tissues, and several reaction products of the complement system.

It is the process by which neutrophils and monocytes can squeeze through the pores of the blood vessels to reach the inflamed area.

Both neutrophils and monocytes move through the tissues by ameboid movements to reach the site of inflammation.

After reaching the site of inflammation, neutrophils and monocytes perform their most important function which is phagocytosis: this means ingestion of the invading organism by endocytosis (phagocytosis).

Neutrophil granules discharge their contents into the phagocytic vacuoles containing the bacteria and also into the interstitial space (degranulation). The granules contain various proteases plus antimicrobial proteins called defensins, and the cell membrane-bound enzyme NADPH oxidase is activated, with the production of toxic oxygen metabolites.

The combination of the toxic oxygen metabolites and the proteolytic enzymes from the granules makes the neutrophil a very effective killing machine. Activated monocytes engulf and kill bacteria by processes generally similar to those occurring in neutrophils.

The tissue Macrophage System (Reticule-endothelial system) is a generalized phagocytic system located in all tissues, but especially in those tissue areas where large amounts of particles, toxins and other unwanted substances must be destroyed such as the liver and spleen.

The basic structure of immunoglobulins is the same for all classes:

There are 5 types of heavy chains: and μ, which determine the classes of immunoglobulins, which are: IgA, IgG, IgD, IgE, and IgM respectively.

There are five classes of immunoglobulin that differ in amino acid sequences in the constant region of the heavy chains.

Immunoglobulin G (IgG) increases in the secondary immune response. It fixes and activates complement (mainly classical pathway). It has antibacterial, antiviral, antiprotozoal, and antitoxin activities. Because of its low molecular weight, it can traverse blood vessels to tissues and can pass through the placenta to the fetus providing passive immunity for the newborn in the first 6 months after delivery.

Immunoglobulin A (IgA) provides immunity for the newborn (found in colostrum and milk). It fixes and activates complement (alternative pathway). It is responsible for local immunity at the mucous membrane surfaces, which are the main entry sites of pathogens.

Immunoglobulin M (IgM) is produced in the primary immune response. IgM gives an agglutination reaction with the antigen. It fixes and activates complement (classical pathway).

Immunoglobulin E (IgE) mediates allergy (type I hypersensitive reaction): IgE binds to receptors on tissue mast cells or blood basophils by its Fc. An antigen binds to this IgE, leading to the release of mediators such as histamine, bradykinin, and serotonin. Histamine and bradykinin cause vasodilatation of small blood vessels of the skin leading to urticaria. Serotonin can cause vasoconstriction and bronchoconstriction leading to bronchial asthma. IgE protects against parasites by causing the release of enzymes from basophils.

Immunoglobulin D (IgD) presents on the surface of B-lymphocytes where it functions as a receptor for antigens. Antibodies against insulin and food toxins are found to be IgD.