White Blood cells form a special system for combating the different infectious & toxic agents by actually destroying invading agents by phagocytosis, and by forming antibodies and sensitized lymphocytes to destroy the invader. Our bodies are exposed continually to bacteria, viruses, fungi, and parasites that occur normally in the skin & mucous membranes. These can cause serious disease if they invade the deeper tissues. We are also exposed to highly infectious bacteria that can cause acute lethal diseases such as pneumonia & typhoid fever.

White blood cells or leukocytes (leukos = white, cytes = cells) are so-called because they are true cells that do not contain the red protein, hemoglobin. The real value of white blood cells is that most are specifically transported to areas of infection, thereby providing a rapid and potent defense against infectious agents. Normal count: the average total leukocytic count is 4000-10,000/mm³ blood. Histologically, WBCs are classified into:

Unlike the erythrocytes, leukocytes do not function within the bloodstream. They travel in the blood from one region to another, then they leave the bloodstream by migrating between the endothelial cells to enter the connective tissue and perform their function. 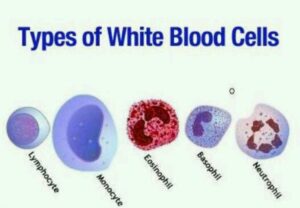 Neutrophils are so-called because their cytoplasmic granules have a neutral staining affinity to the stains in the blood film. Neutrophils are also called polymorphonuclear leukocytes (PNLs) because of the variability of their nuclear shapes. Young, mature cells are bilobed while older cells may show up to 5 nuclear lobes. Normal differential count: they constitute 60-70 % of the total leukocytic count.

Shape: during phagocytosis, PNL’s have an irregular outline due to the extension of pseudopodia. The cytoplasm contains two types of granules:

PNLs are the first line of defense against any invading micro-organism as they leave the circulation and migrate to the site of action in connective tissue. They are called microphages, they recognize and engulf small particles such as bacteria and destroy them using the contents of their granules. During the inflammatory reaction, neutrophils themselves are damaged by the bacterial toxins and by the products of the different inflammatory cells causing their death and they are called pus cells.

Eosinophils are so-called because they have a strong affinity to the eosin component of the stains in the blood film. Normal differential count: they constitute about 1-4 % of the total leukocytic count.

They migrate to the connective tissue particularly under the mucosa of the digestive, respiratory, and genito-urinary tracts as well as in the skin. Eosinophils are activated in parasitic infections. They are not phagocytic cells. The proteins in their specific granules act on the surface of the parasitic worm, forming pores in it, thus facilitating access of other lethal substances in the granules, to the parasite causing its death. They are responsible for the down-regulation of allergic immune reactions by the histaminase enzyme.

They are so-called because of their strong affinity to the basic component of the stains in the blood film. Basophils are also called mast-cells of the blood because they secrete heparin and histamine like the connective tissue mast cells. Normal differential count: they are the least numerous leukocytes, constituting about ½-1% of the total leukocytic count.

Nucleus: bilobed, S-shaped. The nucleus is obscured by the abundant basophilic cytoplasmic granules in the cytoplasm.

When stained with toluidine blue, basophils demonstrate a metachromatic staining property where the granules appear red instead of blue because of their content of heparin (sulphated glycosaminoglycans).

Basophils are similar to mast cells, they are involved in hypersensitivity reactions. The release of histamine causes vasodilatation, oedema, bronchospasm, and skin rash. The sudden release of large amounts of histamine from the granules might lead to a generalized fatal allergic reaction (anaphylaxis).