Folate and vitamin B12 are essential for DNA maturation during erythropoiesis, hence their deficiency causes anemia. Vitamin K acts as a co-factor in the synthesis of several clotting factors in the liver, and its deficiency causes bleeding tendency. Folate deficiency leads to Glossitis, and gastrointestinal disturbances, Macrocytic anemia associated with megaloblastic changes in the bone marrow.

Folic acid is formed of pteridine nucleus (bicyclic nitrogenous compound), p-aminobenzoic acid (PABA), and glutamic acid. Animal cells are not capable of synthesizing PABA or of attaching the first glutamate to pteroic acid, but bacteria and plants can, thus animals require folic acid in their diet. and the requirements of folic acid are 200 μg/day.

Sources of the one-carbon group

Functions of one carbon group

Various one carbon tetrahydrofolate derivatives are used in biosynthetic reactions, for example:

These are substances used in the treatment of malignant diseases (cancer) e.g. methotrexate (amethopterin) and aminopterin. They act by blocking the synthesis of nucleic acids in malignant cells presumably by preventing the reduction of folic acid to tetrahydrofolic acid. 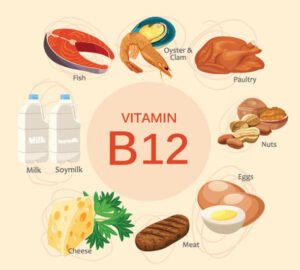 Requirements of Cobalamin are 2µg/day, Cobalamin has two characteristic compounds:

The central portion of the molecule (corrin ring) consists of 4 reduced and extensively substituted pyrrole rings. It is very similar to porphyrin structure but differs from porphyrin in that 2 of the pyrrole rings (ring A and D) are joined directly rather than through a methane bridge. Coordinated to the four inner nitrogen atoms of the corrin ring is an atom of cobalt.

Cobalt is in a coordination state of six. In the remaining position, It is coordinated to one of several different ligands: cyanide (CN), hydroxy (OH), methyl (CH3), or 5-deoxy adenosine to give in order: Cyanocobalamin, Hydroxycobalamin, Methylcobalamin, and 5-deoxyadenosyl cobalamin.

Sources of Cobalamin (vitamin B12)

The only source of cobalamin in nature is through synthesis by micro-organisms in the animal intestine. In general, it is not present in vegetable foods. The only sources of the vitamin are foods of animal origin as liver, kidney, meats, milk, and eggs, negligible amounts are provided by intestinal flora. Neither animal nor plants can synthesize it.

Functions of Cobalamin (vitamin B12)

The two coenzyme forms of cobalamin are methyl-cobalamin in the cytoplasm and 5-deoxyadenosyl cobalamin in mitochondria. In men, there are only two biochemical reactions in which B12 is known to participate:

Manifestations of vitamin B12 deficiency

Vitamin K is required for the conversion of several blood clotting factors (II, VII, IX, and X) to the active state. All these factors are proteins synthesized in the liver in an inactive precursor form. The mechanism of vitamin K-dependant activation for prothrombin.

The γ-carboxyglutamic acid residues are good chelators and allow prothrombin (active) to bind (chelate) calcium. The prothrombin-Ca-complex, in turn, binds to the phospholipid membrane, where proteolytic conversion to thrombin can occur.

Vitamin K is an essential cofactor for the carboxylase enzyme that forms γ-carboxyglutamic acid residues from the glutamic acid residues in the specific protein molecules. Apart from the clotting process vitamin K probably acts as a cofactor in oxidative phosphorylation (coenzyme Q, an essential component of oxidative phosphorylation, is similar to vitamin K in structure). Vitamin K is an antidote to the dicumarol anticoagulant.

It is manifested by bleeding tendency.