The lymphatic system consists of the lymph nodes, spleen, thymus as well as the lymphatic tissue found in the small intestine (Peyer’s patches) and throat (adenoid tonsils, palatine & tubal tonsils), It is a part of your immune system, It has many functions, It can protect your body from illness-causing invaders, maintain body fluid levels, absorb digestive tract fats and remove cellular waste. Blockages, diseases or infections can affect your lymphatic system’s function.

Functions of the Lymphatic System

It consists of a complex network of lymphoid organs, lymph nodes, lymph ducts, lymph tissues, lymph capillaries, and a network of lymphatic vessels that carry lymph and other substances throughout the body. The lymphatic system can produce immune cells (such as lymphocytes, monocytes, and antibody-producing cells called plasma cells), It can absorb fatty acids and subsequent transport of fat, chyle, to the circulatory system.

Histological structure of the lymph node 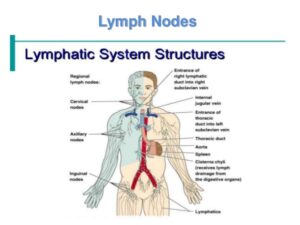 The lymph node is surrounded by a fibroelastic capsule that sends many perpendicular septa (trabeculae) that divide the cortex into several compartments. On reaching the medulla, these trabeculae run in different directions, anastomosing with each other. Reticular connective tissue network supporting the parenchymal cells and the lymph sinuses in its meshes.

Cortex can be divided into two regions which are the outer cortex and inner cortex. The outer cortex is situated under the capsule. It consists of the cortical lymphoid nodules separated by the cortical lymph sinuses. The cortical nodules are rounded or oval dense lymphoid nodules formed by B lymphocytes and macrophages. When the lymph node is activated by the lymph-borne antigens, the B lymphocytes at the center of the nodule will develop into larger, less closely-packed lymphoblasts forming pale central areas called germinal centers.

The result of the germinal center formation is the production of an expanded population of B memory cells and plasma cells. The cortical lymphoid nodules are either primary (without germinal center) or secondary (with the germinal center). Inner cortex (thymus-dependent zone) or the paracortical area consists mainly of T lymphocytes which are not arranged as nodules.

Lymph circulation in the lymph node

The spleen is the largest lymphoid organ in the body. Its function is to filter the blood. Histologically, the spleen is formed of stroma and parenchyma.

Histological structure of the spleen

The spleen is surrounded by a thin capsule covered by peritoneum (mesothelial cells). At the hilum, the capsule is thickened and sends trabeculae that run in the splenic parenchyma in different directions carrying along with them the blood vessels. The capsule and the trabeculae consist of collagen, elastic, and numerous smooth muscle fibers. Reticular connective tissue network supporting the parenchymal cells and the blood sinusoids in its meshes. It is denser in the white pulp than in the red pulp.

White pulp (The Malpighian corpuscles) is formed of lymphoid nodules, scattered in the substance of the spleen. These lymphoid nodules are traversed by the central artery or follicular artery which is always eccentric in position. The areas around the central arteries are called periarterial lymphoid sheaths (PALS) which are thymus-dependent areas consisting predominantly of T-lymphocytes. The lymphoid nodules are formed mainly of B lymphocytes & macrophages. They may contain germinal centers formed of lymphoblasts & plasma cells which then migrate to the red pulp.

The red pulp is formed of a network of branching and anastomosing blood sinuses (splenic blood sinusoids) separated from each other by the splenic cords or Billroth’s cords. The splenic cords are cellular masses of varying thicknesses and shapes, consist of erythrocytes, macrophages, lymphocytes, plasma cells, and granulocytes.

The blood sinuses of the spleen are characterized by the presence of slits between the endothelial cells, so worn out or defective erythrocytes and platelets are severely damaged when they pass through these slits and phagocytosed by the macrophages associated with the sinusoidal walls.

The marginal zone is the area around the margins of the lymphoid nodules between the red and white pulps. It is important because it is the site where:

Tonsils are organs composed of aggregations of incompletely- encapsulated lymphoid tissue. They form a ring surrounding the pharynx that lies beneath the epithelium at the beginning of the digestive and the respiratory tracts. They include the palatine tonsils, the pharyngeal tonsil, and the lingual tonsils.

The two palatine tonsils are located in the lateral walls of the oropharynx. Each tonsil is characterized by: