The properties, source and cycle of oxygen gas

The atmosphere contains oxygen gas that necessary for the respiration process, It is a mixture of gases surrounding the Earth, It is attracted to Earth by gravity, It protects the Earth by absorbing ultraviolet radiations coming from outer space and it adjusts the temperature of the Earth’s surface. 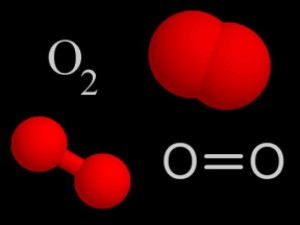 Oxygen gas exists in the atmosphere in a gaseous state, it represents 21 % of the air volume of the atmosphere, oxygen molecule consists of two oxygen atoms.

The green plants are the main source of oxygen gas as they produced it during the photosynthesis process, oxygen gas is consumed in the respiration and combustion processes, So, the ratio of oxygen gas (21 %) in the atmosphere is fixed. 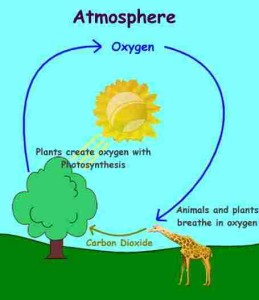 In the photosynthesis process, the green plants (the plants that have the chloroplasts) take carbon dioxide from the air, the water and mineral salts from the soil and the sunlight (light energy) to produce the nutrients and oxygen gas.

The properties of oxygen gas

Oxygen gas has a neutral effect on litmus paper, It does not burn but helps in burning and it is heavier than the air so, It replaces the air, It scarcely dissolves in the water, it is a colorless, tasteless and odorless gas, It has the ability to combine directly with most elements forming oxides.

Combination of oxygen gas with elements

Oxygen gas combines with elements in two ways which are the oxidation process and burning process ( combustion), Oxidation is a slow combination between oxygen and element in the presence of moisture ( the water ) as iron rusting.

Iron rusting causes erosion and damage of ironware as the bridge’s pillars and the method to avoid iron rusting is the isolation of ironware by paints to protect them from rusting.

Burning (combustion) is a rapid combination (union) between oxygen and element producing heat and light, And the weight of the elements increases after combustion with oxygen as burning a piece of cleaning wire.

The oxidation and the reduction reactions