DNA replication is a biological process that occurs in all living organisms acting as the most essential part of biological inheritance. It is the process by which DNA makes a copy of itself during cell division.

Rules of DNA replication in eukaryotes

During polymerization, discrimination between correct and incorrect nucleotides depends on base-pairing interactions (A=T and G≡C). Proofreading 3´→ 5´ exonuclease activity double- checks each nucleotide after it is added and removes the mispaired one. The additional accuracy is accounted for by a separate enzyme system that repairs the mismatched base pairs remaining after replication.

Requirements of DNA replication in eukaryotes 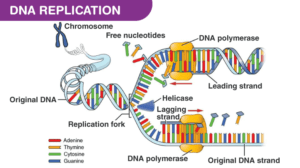 DNA is synthesized by DNA polymerases

DNA polymerases require the presence of a primer (i.e. oligonucleotide of RNA with free 3´ hydroxyl group), a template (i.e single-stranded DNA), and deoxyribonucleotides (d ATP, d CTP, d GTP, and d TTP) in order to function. The primer provides a site for the polymerization to begin. The free 3´ hydroxyl group of the primer acts as an accepter for the first deoxyribonucleotide in the newly formed DNA strand.

In eukaryotes, there are at least 5 DNA polymerase enzymes (α, β, γ, δ and ε )

DNA is degraded by nucleases or DNases

They may be either exonucleases or endonucleases. Exonucleases degrade nucleic acids from one end of the molecule operating either from 5´→ 3´ or from 3´ →5´ direction of one strand of the double-stranded nucleic acids.

Endonucleases can begin to degrade at any internal site in a nucleic acid strand, reducing it to smaller and smaller fragments. Other enzymes (e.g. helicase, topoisomerase, and DNA ligase) and protein factors (e.g. origin binding proteins and single-stranded binding proteins) are required for the replication process.

Steps of DNA replication in eukaryotes

The synthesis of a DNA molecule can be divided into three stages: initiation, elongation, and termination.

The unwinding of double-stranded DNA: The interaction of these proteins with the replicators leads to the unwinding of DNA forming “replication bubbles”.

RNA primer synthesis: DNA polymerase α with primase activity is responsible for the synthesis of a short RNA primer in 5´→3´ direction, beginning at the origin of each parental strand. The parental strand is used as a template for this process.

Both leading and Okazaki fragments of lagging strands are synthesized from 5´→ 3´ direction. There is a leading and a lagging strand for each of the two replication forks. Then, DNA polymerase ε begins to remove the RNA primers. The gap is then filled by a polymerase (δ/ε).

Both DNA polymerase δ and ε have the ability to proofread their work by means of a 3´→5´ exonuclease activity. If DNA polymerase makes a mistake during DNA synthesis, the resulting unpaired base at the 3´ end of the growing strand is removed before synthesis continues.

Ligation of the newly synthesized DNA segments: DNA ligase seals the nicks between  Okazaki fragments, converting them to a continuous strand of DNA. DNA ligase requires ATP to form a phosphodiester bond between the two nucleotides.

The termination of replication on linear eukaryotic chromosomes involves the synthesis of telomeres at the ends of the chromosome.

It is an enzyme in eukaryotes used to maintain the telomeres. It contains a short RNA template complementary to the DNA telomere sequence, as well as telomerase reverse transcriptase activity. Telomerase is thus able to replace telomere sequences that would otherwise be lost during replication. Normally, telomerase activity is present only in embryonic cells, germ (reproductive) cells, and stem cells but not in somatic cells.

Cancer cells often have relatively high levels of telomerase, preventing the telomeres from becoming shortened and contributing to the immortality of malignant cells. After replication is complete, the parent and daughter strands reform double-stranded DNA.

In eukaryotic cells, the double-stranded DNA must precisely reform the chromatin structure including nucleosomes that existed prior to the onset of replication. The 2 identical sister chromatids are separated from each other when the cell divides during mitosis.

Quinolones are a family of drugs that block the action of prokaryotic topoisomerase thus preventing DNA replication and transcription. These drugs such as Nalidixic acid and ciprofloxacin act as antibiotics. While inhibitors of eukaryotic topoisomerases as Etoposide are becoming useful as anticancer agents.