Ribosomes are granules of nucleoproteins, ribosomal RNA (rRNA) conjugated with proteins. They are present in all cells especially abundant in cells where protein synthesis is taking place. Each ribosome is formed of two subunits, a small subunit, and a large subunit. The rRNAs of both subunits are synthesized inside the cell nucleus within its nucleolus.

Ribosomal-associated proteins are synthesized in the cytoplasm and then enter the nucleus and associate with rRNA. Ribosomal subunits then leave the nucleus, via the nuclear pores, to enter the cytoplasm. The small and large subunits are present in the cytosol individually and do not form a ribosome until protein synthesis begins.

Ribosomes, when present in large amounts they cause cytoplasmic basophilia due to their contents of the nucleic acids. 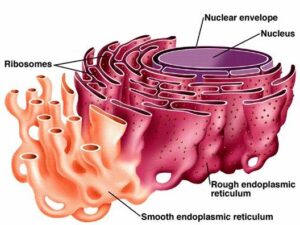 Ribosomes are small electron-dense granules, their appearance depends on their types and functions:

The endoplasmic reticulum forms the most extensive membrane system in the cytoplasm. The ER has two types:

Both types from a single membrane system but their histological appearance, relative proportions, and functions vary in different cell types.

When present in large amounts they cause cytoplasmic basophilia due to their attached ribosomes.

It consists of interconnected parallel flattened sacs called cisternae. It appears rough because its cytosolic surface is studded with ribosomes, resting by their subunit on the membranes of ER. It is continuous with the outer membrane of the nuclear envelope. The lumen contains flocculent material that represents a newly-formed protein.

The function of Rough endoplasmic reticulum

The function of Smooth endoplasmic reticulum