The endocrine glands are the sites of synthesis and secretion of hormones, in certain amounts, which are disseminated throughout the body by the bloodstream where they act on target organs. Endocrine glands do not have a duct system, so they are also called “ductless glands”.

The endocrine system and the nervous system are the two main coordinating and integrating systems of the body. The two systems are linked, however, through the hypothalamus which controls the secretion of many of the endocrine glands.

Endocrine glands, in general, are composed of a group of secretory cells of epithelial origin supported by a highly vascular connective tissue. The secretory cells discharge their hormones in the interstitial spaces from which they are rapidly absorbed into the circulatory system via fenestrated capillaries to reach the target organs and cells.

Histologically the endocrine system consists of: 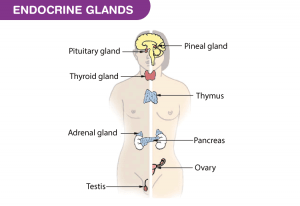 A hormone can be defined as a chemical substance that is synthesized and secreted by a specific cell. It is transported by circulation and at very low concentrations. It elicits a specific response in distant target tissues.

Target cell is defined by its ability to bind selectively with a given hormone via a receptor. Receptors are proteins. All receptors have at least two functional domains. A recognition domain binds the hormone, and a second domain generates a signal to some intracellular function (what is called signal transduction).

The Principal Endocrine Glands are:

In addition to the endocrine glands, the following organs also secrete hormones:

Chemistry of Hormones and General structure of cells secreting it:

The histological structure of the hormone secreting cells depends on the type of the secreted hormone. Chemically, the hormones are classified into three types:

These are derived from cholesterol. Steroid hormones are secreted by:

These cells are characterized by:

2- Derivatives of the amino acid tyrosine

Two groups of hormones are derivatives of the ammo acid tyrosine.

These cells are characterized by:

Once released into the bloodstream, water-insoluble hormones (e.g thyroid and steroid hormones) are bound to specific plasma binding proteins. The carrier proteins are secreted by the liver to prevent the loss of this hormone from the kidney and to act as physiological regulators of the free levels of the hormone.
Near the target cell, the free hormone can diffuse into the cell. Inactivation of hormones may occur in the blood, in the liver, in the kidney, or in other target tissues. Hormones may be inactivated by degradation, oxidation, reduction, methylation, or conjugation to glucuronic acid then excreted in the urine or bile.

Hormones can be classified according to:

Hormones of group I

They include steroid Hormones, T3 & T4, calcitriol (1,25 dihydroxycholecalciferol), and retinoic acid. They are lipophylic (can penetrate the lipid bilayer of the cell membrane). They combine with a transport protein after their secretion. They have cytoplasmic receptors, and after binding to their receptors, they form hormone receptors, complex which is the intracellular messenger of the group.

They include polypeptide and protein hormone, glycoproteins and catecholamines. They are hydrophilic (cannot penetrate the membrane bilipid layer). They combine with membrane receptors and send second messengers to induce the metabolic process. According to the nature of the second messenger, this group is sub-classified into:

Hormones of groups I and II

A given hormone‘s effects are influenced not only by the concentration of the hormone itself but also by the concentrations of other hormones that interact with it. Because hormones are widely distributed through the blood, target cells may be exposed simultaneously to many different hormones, giving rise to multiple hormonal interactions on target cells. A hormone can influence the activity of another hormone at a certain target cell in one of three ways: permissiveness, synergism, and antagonism.

Synergism occurs when the actions of several hormones are complementary and their combined effect is greater than the sum of their separate effects. An example is the synergistic action of follicle-stimulating hormone and testosterone both of which are required for maintaining the normal rate of sperm production. Synergism results from each hormone‘s influence on the number or affinity of receptors for the other hormone.

Antagonism occurs when one hormone causes the loss of another hormone’s receptors, reducing the effectiveness of the second hormone. An example of antagonistic action is the action of cortisol against the action of insulin on carbohydrate metabolism.

Endocrine disorders commonly result from abnormal plasma concentrations of a hormone due to inappropriate rates of secretion, either too little hormone secreted (hyposecretion) or too much hormone secreted (hypersecretion) Endocrine disorder, however, may arises because target-cell responsiveness to the hormone is abnormally low, even with the normal plasma level of the hormone.

Hypersecretion, hypersecretion by a certain endocrine gland is either primary or secondary depending on whether the defect lies in that gland (as tumor) or results from excessive stimulation of the gland from the outside (as increase secretion of stimulating hormone for such gland).