The cell division is the process in which the parent cell divides into two or more daughter cells, An essential feature of the living cells is their ability to divide. Two types of cell division exist, mitosis and meiosis.

Mitosis means the division of the somatic cell into two daughter cells identical to the mother cell. Mitosis is included in the cell cycle and it is essential for growth and development of the organism as well as the renewal and repair of its cells. Mitosis could be divided into the following stages:

The 46 d-chromosomes become maximally condensed and are aligned at the equatorial plate of the cell. Each pair of sister chromatids is parallel to the equator of the cell and is attached to the microtubules of the mitotic spindle at the kinetochore.

Division of the centromere results in the separation of the sister chromatids from each other. Every 46 chromatids migrate toward the opposite poles of the cell. In late anaphase, a constriction (cleavage furrow) develops at the equatorial plate of the cell membrane. 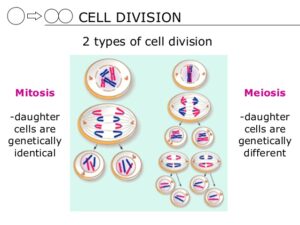 The mitotic spindle disappears and the nucleolus reappears. The chromosomes start uncoiling and become organized into the interphase chromatin (46 s-chromosomes). The nuclear envelope is reformed around them at each pole.

This type of cell division occurs in germ cells and results in the formation of gametes (sperms in males and ova in females). Meiosis ends with the formation of 4 daughter cells, each contains 23 s-chromosomes (haploid number). After fertilization, the diploid number is restored in the embryonic somatic cells. It consists of two successive divisions, without an intervening S phase.

It results in the reduction of the number of chromosomes.

Metaphase I: the 23 tetrads arrange themselves at the equatorial plate of the cell.

Anaphase I: the centromeres do not divide at the metaphase plate, consequently a member of each homologous pairs moves separately towards one of the opposite poles of the cell.

Telophase I: cytokinesis occurs, this results in two daughter cells each containing the haploid number as 23d-chromosomes.

It is very similar to mitosis but is not preceded by an S phase of DNA replication. The daughter cells from the first meiotic division go into meiosis II with 23d-chromosomes each.

In metaphase II: each chromosome line up individually at the equatorial plate of the cell.

In anaphase II: the centromere splits so that each of the two chromatids goes separately to one of the opposite poles of the cell.