The salivary glands produce saliva through a system of ducts, you have three paired major salivary glands (parotid, submandibular, and sublingual), as well as hundreds of minor salivary glands, In humans, 1200 to 1500 ml of saliva are produced every day, The secretion of saliva (salivation) is mediated by parasympathetic stimulation; acetylcholine is the active neurotransmitter and binds to muscarinic receptors in the glands, leading to increased salivation.

The mouth cavity is continuously lubricated and washed out by saliva. It is the secretory product of a group of salivary glands that open into the oral cavity. Saliva aids in digestion, It keeps your mouth moist, and supports healthy teeth. Salivary glands are generally categorized under two groups:

A. The main (major) salivary glands

These include three pairs of glands; the parotids, the sublingual, and the submandibular glands. They are large compound tubuloalveolar (tubuloacinar) glands, which pour their products via a branched system of ducts. Their secretion is regulated by nervous reflexes.

B. The accessory (minor) salivary glands

These include unpaired glands; the buccal, labial, lingual, and palatine glands, They are small, simple tubuloalveolar glands scattered in the oral mucosa, They secrete continuously to moisten and lubricate the oral cavity. 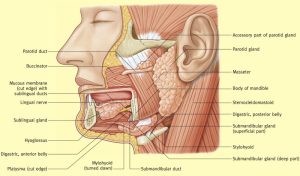 The salivary gland is constructed of stroma and parenchyma.

There are three types of acini found in the salivary glands:

They secrete mucus (viscid glycoprotein) secretion. They are present in the sublingual submandibular, buccal, labial, and palatine glands.

Histological features of a mucous acinus

They produce watery secretion rich in salts and digestive enzymes. They are present in the parotid, submandibular, and the Von Ebner’s glands.

Histological features of a serous acinus

They are present in the submandibular and a few in the sublingual glands. In routine histological preparation, the mixed acinus appears as a mucous with a cap of serous cells (serous demilunes). Recent microscopic studies indicated that each acinus is formed of mucous cells with some serous cells interspersed among them. Both cells pour their secretion into the lumen of the acinus.

B. The duct system:

1. The intralobular ducts formed of 2 parts:

3. The interlobar ducts: larger ducts in the interlobar septa, They are lined by pseudostratified columnar epithelium.

4. The main duct: large duct with a wide lumen. It is lined at its beginning by stratified columnar epithelium which gradually becomes non-keratinized stratified squamous epithelium similar to that lining oral cavity where it opens.

Histological features of the parotid gland

Histological features of the submandibular gland

Histological features of the sublingual gland