The alimentary canal is the doorway through which all nutrients and energy sources pass before they are utilized. It extends from mouth to anus. The associated glands include salivary glands, liver and pancreas which empty their secretion into the alimentary canal. Accessory organs include the tongue, teeth, and muscles of mastication.

Parts of the digestive system

Physiological functions of the GIT

Innervation of the digestive tract 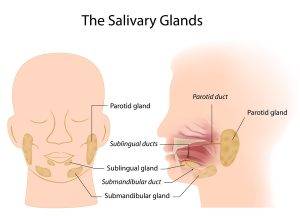 Intrinsic innervation of the gut

Extrinsic innervation of the gut

The intrinsic neural plexuses of the enteric nervous system are connected together and are modulated by extrinsic autonomic nerves (sympathetic and parasympathetic). The parasympathetic supply is generally excitatory to the enteric nervous system: it stimulates motility and secretion. However, it contains also some inhibitory vagal fibers to the stomach and the gastrointestinal sphincters.

The sympathetic nerve supply generally inhibits secretion and motility. However, it contains also some excitatory fibers. Sensory fibers arise from the luminal epithelium and wall of the gut to the enteric plexuses and from there to the prevertebral ganglia, spinal cord, and brain stem.

There are three main pairs of salivary glands, which are the parotid, submandibular and sublingual salivary glands. In addition, the buccal mucosa contains a large number of small glands which secrete mucus. Salivary glands are exocrine glands, with ducts opening into the oral cavity. The volume of salivary secretion ranges between 1000 and 1500 ml/day.

In man, the parotid secretion is entirely of the serous type. The submandibular glands secrete both serous and mucus types of secretion and the sublingual as.

Salivary secretion is an active process

Thus saliva is the hypotonic solution. Thus salivary secretion does not obey the laws of physical chemistry and needs energy for the manufacture of its constituents as well as for the osmotic or mechanical work done. During salivary secretion, the oxygen consumption of the glands increases 3-4 times the resting value, and glucose uptake by the gland is also increased.

Stimulation of parasympathetic nerve supply causes the production of the chemical transmitter acetylcholine at the postganglionic nerve endings, which has secretory and vasodilator effects which result in:

Effect of stimulation of the sympathetic nerve supply

The amount of salivary secretion ranges from 1 to 1.5 liters/day. It is a colourless, viscous fluid, with slightly acidic pH: 6.6-7.1. It is hypotonic relative to the plasma.

Lysozyme: has antibacterial action because it destroys the polysaccharides covering of bacterial capsule.

Salivary secretion is evoked by a nervous mechanism. Hormonal regulation would be too slow to meet with such a function which needs a rapid response. It plays a role only in the modification of salivary contents. Nervous regulation is achieved via two types of reflexes conditioned and unconditioned.

A- Unconditioned reflexes (Inborn, do not depend on training)

Unconditioned reflexes are triggered if food, acids or alkalis are introduced into the mouth, stimulating the buccal mucosa mechanically or chemically. This leads to profuse salivation. Also, any irritation of the buccal cavity by moving the tongue inside the mouth or during speech causes salivary secretion.

Impulses from mechanical stimuli and common sensations (touch, pain, warm, and cold) are conducted by the lingual nerve, palatine branch of the trigeminal nerve and pharyngeal branch of the vagus nerve.

Centre: Parasympathetic: salivatory centers in the medulla oblongata. Sympathetic: lateral horn cells in the first and second thoracic segments of the spinal cord.

Efferent: Along the autonomic nerves supplying the salivary glands.

B- Conditioned reflexes (acquired, depend on training)

Stimulation of any sensory nerve endings in the body in absence of food from the buccal cavity (as optic, auditory, and olfactory nerves) can be converted by training into conditioned stimuli for salivation.

This is documented by the classic experiment by Pavlov, who used to ring a bell before giving food to a dog. Subsequently, ringing the bell without any food intake triggered salivation in the dog. In this case, hearing the bell is associated in the cerebral cortex with food intake.

Centre: Cerebral cortex and from there the impulse travels to the salivatory centres in the medulla oblongata.