Saliva has an enzyme called amylase that makes it easier for the stomach to break down starches in food. It helps moisten food so we can swallow it more easily. Saliva prevents infections in the mouth and throat. It has an important role in our oral health, It helps to maintain healthy teeth and prevent bad breath, It moistens the oral cavity, which helps with swallowing and speaking.

The paired parotid glands, together with the paired submandibular and sublingual glands and the numerous small glands scattered throughout the mouth cavity, constitute salivary glands.

The parotid gland is the largest gland of the salivary glands, there is a small part that lies over the parotid duct is called the accessory part of the gland.

Shape and lobes and surfaces of the gland

The parotid gland is wedge-shaped, with its base above and its apex behind the angle of the mandible. It has three surfaces: 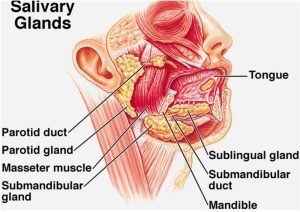 Capsules of the gland:

That is why a swelling in the parotid gland becomes very painful because it is enclosed between the splitted two layers of deep fascia.

The parotid duct corresponds to the middle third of a line extending between two points:

Structures within the parotid gland

1- Facial nerve: (the most superficial structure)

The facial nerve enters the gland through the posteromedial surface, Then, it breaks to form a plexus (pes anserinus) inside the parotid gland, The plexus gives a group of terminal branches which leave the gland through:

It enters the gland through the antero-medial surface and leaves it through the upper pole.

Blood supply: The external carotid artery and the terminal branches within the gland, namely, superficial temporal and maxillary arteries, supply the gland, and the veins drain into the retromandibular vein.

Parasympathetic: the fibres pass through the glossopharyngeal nerve, They leave the nerve in its tympanic branch; which reach the tympanic cavity where it breaks into the tympanic plexus. The fibers leave the plexus through lesser superficial petrosal nerve which leaves to the infratemporal fossa through the foramen oval then relay in the otic ganglion. Postganglionic fibers reach the gland through the auriculotemporal nerve.

Sympathetic fibers: reach the gland as a plexus of nerves around the external carotid artery.

Relations of the parotid gland

The submandibular gland is a large salivary gland which lies partly under the cover of the body of the mandible and it is made up of a large superficial part and a small deep part, which are continuous with each other around the posterior border of the mylohyoid muscle.

I. The superficial part of the gland

It lies in the digastric triangle. Posteriorly, it is separated from the parotid gland by a stylomandibular ligament.

Relations of the superficial part of the gland

II. The deep part of the gland

Relations of the deep part of the gland

It extends forwards between mylohyoid and hyoglossus muscles below the lingual nerve and above the hypoglossal nerve.

Beneath the mucous membrane of the floor of the mouth, It is crossed laterally by the lingual nerve then below then medial to the duct (triple relation) and then lies between the sublingual gland laterally and genioglossus muscle medially, It opens into the floor of the mouth on the summit of a small sublingual papilla, which is situated at the side of the frenulum of the tongue.

Lymph vessels drain into the submandibular and the deep cervical lymph nodes.

The sublingual gland is the smallest of the three main salivary glands, It lies beneath the mucous membrane of the floor of the mouth, close to the midline.