The skull is a shell for the brain and the origins of the central nervous system, it includes all the bones of the head, face, and jaws, there are twenty-eight individual bones, eleven of them are paired, to form a bilaterally symmetrical three-dimensional structure and six of them are single, unique bones, The skull bones are categorized into regional and development bones, the skull is classified by its two main parts: the cranium and the mandible.

The squamous part of the temporal bone articulates in front with the greater wing of the sphenoid and upwards with the parietal bone at the parieto-temporal suture. This suture meets the lambdoid suture posteriorly at a point called Asterion. 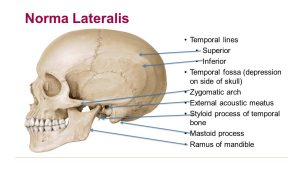 It is the skeleton of the lower jaw and the only mobile bone of the skull. It is formed of a body and two rami.

The body of the mandible:

It is horse-shoe shaped having two margins (an alveolar margin and a lower border) and two surfaces (outer & inner). The upper border: carries the sockets for 16 teeth. The base of the mandible: continues posteriorly with the posterior border of the ramus. It shows 2 digastric fossae on either side of the midline anteriorly.

A. The outer surface: it has the following features:

B. The inner surface: It shows the followings:

Ramus of the mandible

It projects upwards on either side from the posterior part of the body. It has 4 borders, 2 surfaces & 2 processes.

a. Mandibular foramen: the center of ramus and leads to the mandibular canal. It transmits the inferior alveolar nerve and vessels. The margin of the foramen is irregular, it presents a prominence called lingula.

b. Mylohyoid groove: It starts below the mandibular foramen and passes downwards and forwards to end below the posterior end of the mylohyoid line of the body.

c. Condylar process: It is an upward flattened projection from the posterior part of the ramus. It consists of:

Nerves related to the mandible

2. Nerves related to grooves on the mandible:

3. Nerves related to the neck of the mandible:

Ligaments attached to the mandible