Secretion of growth hormone is controlled by two factors secreted in the hypothalamus and transported to the anterior pituitary, these are:

When growth H. level increases in the blood, it reduces the rate of growth H. secretion from the pituitary gland. This is called negative feedback control. 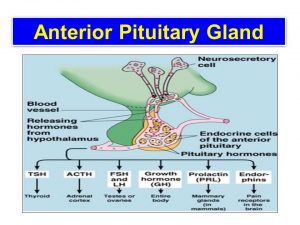 The effects of hypofunction in adults may be partial or complete:

This is the generalized failure of the anterior pituitary gland (panhypopituitarism). It is characterized by:

The deficiency of growth hormone affects the growth of all tissues of the body, so, the rate of development is greatly decreased.

Effects of hypersecretion of GH

A) during childhood (before the union of epiphyses):

Hypersecretion of GH during childhood will lead to:

Most giants, unfortunately, develop partial hypopituitarism if they remain untreated due to exhaustion of the gland at terminal stages. This general deficiency of pituitary H. usually causes death in early adulthood.

B) during adulthood (after union of epiphyses):

Increase growth H. after adolescence will lead to:

It is a protein hormone secreted from the anterior pituitary, It is also called lactogenic hormone (LTH).

IV) Other factors: Prolactin secretion increased by exercise, surgical and psychological stresses, and stimulation of the nipple through suckling reflex.

Effects of hypersecretion of prolactin

Excess prolactin in the blood leads to: