The lower limb or lower extremity includes the foot, thigh, and hip or gluteal region. The human leg refers only to the section of the lower limb extending from the knee to the ankle, also known as the crus or, especially in non-technical use, the shank. Female legs include greater hip anteversion & tibiofemoral angles, but shorter femur and tibial lengths than those in males.

The human lower leg is the part of the lower limb that lies between the knee and the ankle in human anatomy. The term lower limb or “lower extremity” is used to describe all of the legs. The leg from the knee to the ankle is called the crus, The calf is the back portion, and the tibia or shinbone together with the smaller fibula make up the front of the lower leg.

The lower limbs include the gluteal region, the thigh, the knee, the leg, the ankle, and the foot. The thigh and the leg are compartmentalized, each compartment having its own muscles that perform group functions and its own distinct nerve and blood supply. 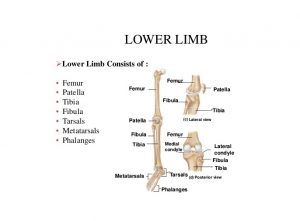 Features of the pelvic bone

Features of the Ilium:

Features of the pubis:

Articulations of the hip bone:

How to know if a hip bone is right or left?

The skeleton of the thigh

Single bone of the thigh is the largest, longest, and strongest bone in the body.

Features of the femur

It is formed of the upper end, shaft, and lower end. The upper end of the femur consists of the head, neck, greater trochanter, and lesser trochanter.

The shaft of the femur is smooth and rounded on its anterior surface but posteriorly has a ridge, the linea aspera, to which are attached muscle and intermuscular septa. The margins of the linea aspera diverge above & below. The medial margin continues below as the medial supracondylar ridge to the adductor tubercle above the medial condyle. The lateral margin becomes continues below the lateral supracondylar ridge.

On the posterior surface of the shaft below the greater trochanter is the gluteal tuberosity for the attachment of the gluteus maximus muscle. The shaft becomes broader toward its distal end and forms a flat, triangular area on its posterior surface called the popliteal surface.

The lower end of the femur

It has the following features:

How to know if a femur is left or right?

Joints of the femur