The pancreas plays an essential role in converting the food we eat into fuel for the body’s cells, It has two main functions: the exocrine function that helps in digestion and the endocrine function that regulates blood sugar, It is located behind the stomach in the upper left abdomen, It is surrounded by other organs including the small intestine, liver, and spleen.

The pancreas has exocrine glands that produce enzymes important to digestion, These enzymes offer trypsin and chymotrypsin to digest proteins; amylase for the digestion of carbohydrates; and lipase to break down fats, The pancreas creates natural juices called pancreatic enzymes to break down foods, These juices travel through your pancreas via ducts.

Position of the pancreas:

Parts of the pancreas:

It consists of the head, neck, body, and tail. The lower part of the head forms a projection called the uncinate process. 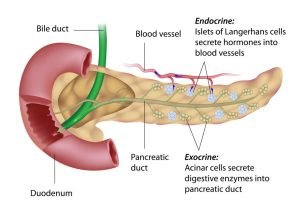 Relations of the pancreas

Head of the pancreas

It lies in the concavity of the duodenum. It is related to the 1st part of the duodenum superiorly, the 2nd part on the right side (separated from it by superior & inferior pancreaticoduodenal arteries), and the 3rd part inferiorly.

The neck of the pancreas:

The tail of the pancreas

Ducts of the pancreas

It has two ducts: