The CNS or central nervous system consists of the brain and spinal cord, It is the most important part of the nervous system for maintaining and producing behavior, The brain controls behavior and regulates the body’s physiological processes. It receives information from the body’s sense receptors, which it achieves through communication with the spinal cord, It uses 20 % of the total oxygen we breathe in.

The arterial supply of the brain comes chiefly from 2 main sources:

Vertebro-basilar system: it consists of: 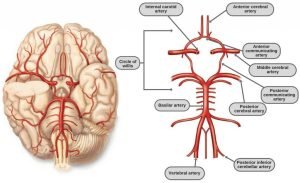 Origin: the vertebral artery arises in the neck from 1st part of the subclavian artery.

Course & relations: the course of the vertebral artery is divided into 4 parts.

Termination: the two vertebral arteries (right and left) unite together at the lower border of the pongs to form a single artery; a basilar artery.

Origin: at the lower border of pons by the union of the 2 vertebral arteries.

Course & relations: it passes on the front of the pons in the midline (pontine sulcus, groove for basilar artery). The artery is related to the abducent nerve (at its beginning) and oculomotor nerve (at its termination).

Termination: at the upper border of pons by bifurcation into the 2 posterior cerebral arteries.

Origin: the 2 posterior cerebral arteries begin at the upper border of the pons as the 2 terminal branches of the basilar artery.

Course & relations: the artery passes around the midbrain to reach the occipital pole of the cerebrum. It sinks inside the calcarine sulcus.

Termination: it terminates by dividing into its terminal cortical branches.

It consists of the intracranial part of the internal carotid artery and its two terminal branches; (the anterior and middle cerebral) arteries.

The ICA enters the middle cranial fossa by passing through the carotid canal then through the upper part of the foramen lacerum, then it passes Inside the cavernous sinus, lastly, it pierces the roof of the cavernous sinus and passes backward above it. The abducent nerve lies infero-lateral to the ICA. At the base of the brain below the anterior perforated substance, the artery terminates into anterior and middle cerebral arteries.

It is smaller at the 2 terminal branches of the ICA. It passes on the medial surface of the brain below the rostrum then in front of the genu then backward above the corpus callosum through the callosal sulcus. It gives cortical branches and central branches.

Cortical branches of the cerebral arteries

The cerebral arterial circle (of Willis) is formed at the base of the brain by the interconnecting vertebrobasilar and internal carotid systems of vessels. This anastomotic interconnection is accomplished by: