The total body water is controlled by: 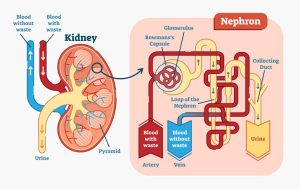 Concentrating mechanism of the kidney

Concentrating mechanism of the kidney

In order to excrete the excess of ingested electrolytes, or in case of inadequate water supply, the kidney excretes concentrated urine, so that excess solutes are eliminated with a little loss of water from the body, The basic requirements for forming concentrated urine are:

Renal medullary interstitium surrounding the collecting ducts is normally hyperosmotic; so, when ADH levels are high, water moves through the tubular membrane by the osmosis into the renal interstitium; and it is carried away by the vasa recta back into the blood, so, the urine concentrating ability is limited by the level of ADH and by the degree of the hyperosmolality of the renal medulla, The process by which the renal medullary interstitial fluid becomes hyperosmotic involves the operation of the countercurrent mechanism.

The counter-current system is a system in which the inflow runs parallel, counter to, and adjacent to the outflow, The countercurrent mechanism depends on the special anatomical arrangement of the loops of Henle and the vasa recta, the specialized peritubular capillaries of the renal medulla, In human, about 25 percent of the nephrons are juxtamedullary nephrons with the loops of Henle and vasa recta that go deeply into the medulla before returning to the cortex.

And finally, the collecting ducts, which carry the urine through the hyperosmotic renal medulla before it is excreted, also play a critical role in the countercurrent mechanism, The first step in the concentration of the urine is to create the hyperosmolality of the medullar interstitial fluid, Four different solute-concentrating mechanisms are responsible for this hyperosmolality.

The medullary blood flow has two characteristics for maintaining the high solute concentration in the medullary interstitial fluid constant.

Operation of vasa recta as counter-current exchangers in the kidney

Diluting mechanism of the kidney

At the thick portion of the loop of Henle, and the first segment of the distal tubule (diluting segment) there is active absorption of sodium ions and secondary active absorption of chloride and potassium ions, The osmolality of the fluid in the ascending limb of the Henle loop decreases progressively to about 100 milliosmoles per kg water by the time the fluid leaves this tubular segment.

To summarize, the process for excreting dilute urine is one of absorbing solutes at the distal segments of the tubules, while water fails to be reabsorbed.