The loop of Henle (or Henle’s loop, Henle loop, nephron loop) is the portion of a nephron that leads from the proximal convoluted tubule to the distal convoluted tubule in the kidney. It creates a concentration gradient in the medulla of the kidney, It creates an area of high urea concentration deep in the medulla, near the papillary duct in the collecting duct system.

Reabsorption in the loop of Henle

The Henle loop functions include Homeostatic mechanisms to regulate the extracellular fluid volume, Regulating potassium, calcium, and magnesium excretion at the lowest energy costs, Homeostasis of the acid-base balance via bicarbonate, and ammonia excretion, Regulating the composition of urinary protein.

It has relatively low permeability to solutes and lacks mechanisms for active solute transport but is highly permeable to water. Water is reabsorbed from the tubular fluid and its osmolality increases as it flows through the thin descending limb. 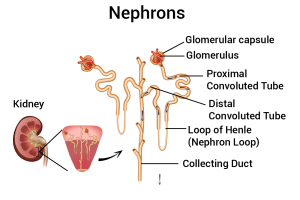 Functions of the loop of Henle

The water permeability of the thick ascending limb is negligible, It actively transports sodium ions, while chloride and potassium ions transport is secondary active to sodium (sodium Co-transport), therefore, the osmolality and the concentration of sodium and chloride of the tubular fluid decrease, The tubular fluid that leaves the loop of Henle is hypotonic.

Summary of functions of the loop of Henle

In this part of the nephron, the volume of urine and its content of sodium, potassium, and hydrogen ions are adjusted according to the water, electrolyte, and acid-base balance of the body.

Within the physiological range of blood glucose level (80-180 mg/100ml), all glucose filtered is reabsorbed by the tubules and none is excreted in the urine. At the critical or threshold level (about 180 mg%) glucose starts to be excreted in urine (Glucosuria) because the absorbing power of some tubules becomes saturated.

With a gradual increase of blood glucose concentration above the threshold value, more renal tubules become saturated until all the tubules become saturated. At a higher concentration, no increase in glucose absorption occurs. The excess of glucose filtered is excreted in urine because the tubules reach their maximum absorbing capacity which is about 375 mg/min. for men and 300 mg/min. for women.

PAH tubular maximum measures the secretory power of the tubules. If PAH is administered intravenously in a small amount so as to maintain a low concentration in blood, it is found that the blood leaving the kidney in the renal vein contains 10% of PAH, 90% of PAHs removed from the renal blood in a single circulation, by filtration, and by secretion.

If PAH concentration in plasma is increased, the rate of tubular secretion increases until a maximum is reached and no further augmentation of secretion occurs. This denotes that the tubules have a limit for the secretory power. Tm PAH equals 75 mg/min.