Active transport of sodium in the proximal convoluted tubules

The basolateral sides of the tubular epithelial cell are highly permeable to potassium that all the potassium diffuses back out of the cell into the interstitium. This sodium transport outward from the cell diminishes the sodium concentration and increases the negativity inside the epithelial cells to approximately-70 millivolts.

This causes the diffusion of sodium from the tubular lumen into the cell according to the “electrochemical” gradient. A carrier protein in the membrane enhances the movement of sodium through the membrane by a process called “facilitated diffusion“. 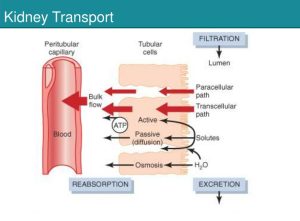 Active secretion occurs in the same way as active absorption except that the membrane transports the secreted substance in the opposite direction, from the brush border not from the sides of the cells e.g. hydrogen ions, potassium, and urate ions.

Hydrogen ions are secreted by secondary active transport from the interstitium into the tubules. This occurs by a protein carrier that transports sodium ions in and hydrogen ions outside the tubule, this is called Na+H+ counter-transport.

Passive transport, or diffusion, means free movement of a substance by a concentration gradient, chemical, electrical, or both, electrochemical gradient.

Passive absorption of water by osmosis

However, the permeability of the membrane for urea in most parts of the tubules is far less than that for water, which means that far less urea is reabsorbed than water. A large proportion of the urea remains in the tubules and is lost in the urine -usually over 50% of all that enters the glomerular filtrate.

Diffusion by electrical differences across the tubular membrane

When active reabsorption of sodium takes place at the tubule, chloride ions are absorbed with it to keep the electrical neutrality.

Ammonia is synthesized inside the tubular cells and then diffuses into the tubular lumen by a concentration gradient.

Sodium ions are the most important ions that determine the osmotic pressure and the volume of the extracellular fluid. About 65% of sodium in the glomerular filtrate is actively reabsorbed from the proximal tubules.

Chloride and bicarbonate reabsorption is a passive process created by diffusion by an electrochemical gradient through the tubular membrane.

The wall of the proximal tubule is freely permeable to water. Absorption of the solutes results in the passive transport of water by osmosis. 65% of water in the glomerular filtrate is reabsorbed by the proximal tubule; this fraction of water is called “obligatory water reabsorption”, since it is osmotically obliged to the absorbed solutes. It is not under the control of the antidiuretic hormone.

Under normal conditions, glucose is completely reabsorbed in the proximal tubule. The process of glucose reabsorption is a secondary active process (Na Co-transport) because it can occur against a concentration gradient.
Glucose is bound to a carrier that transports Na at the same time. The electrochemical gradient for Na provides the energy for the transport of glucose across the brush border to the inside of the cell. The transport of glucose from inside the cell to the peritubular fluid occurs by another carrier and down its concentration gradient, so it is called “Facilitated diffusion”.

Secretion in the proximal tubules

The secretory function of the human tubules is mostly concerned with certain foreign substances e.g. Diodrast, Para-aminohippuric acid, penicillin, and others. Moreover, some substances are produced in the body and secreted by the proximal tubule e.g. most of the hydrogen ions, are secondary actively secreted by the proximal tubules, but without a marked decrease in urine PH.
Juxtaglomerular apparatus structure, function & Autoregulation of glomerular filtration rate