The renal parenchyma represents a compound tubular gland as each kidney is formed of about 1- 4 million uriniferous tubules (structural unit of the kidney). The renal tubules are held together by the renal interstitium, where a delicate network of reticular fibers supporting the parenchymal elements, blood vessels, and interstitial fibroblasts are present.

The uriniferous tubule is formed of 2 parts with a different embryological origin, these are:

A. The nephron: composed of:

B. The collecting duct. 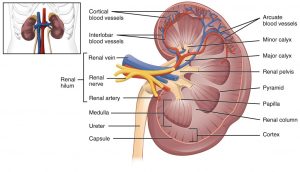 Structure of the kidney

Longitudinal hemi-section of the kidney shows

According to the position of the renal corpuscles in the cortex, nephrons are classified into:

The renal artery, on entering the renal hilum divides into many interlobar arteries that run between the renal pyramids. At the corticomedullary junction, these arteries turn to follow an arched course along with the bases of the pyramids forming the arcuate arteries. From the arcuate arteries, interlobular arteries branch off at right angles. They ascend through the cortex and give off the afferent arterioles, to the nearby renal corpuscles.

The kidneys have a high blood flow rate. One-fourth of the cardiac output passes into the kidney/minute (1300 ml blood/minute). The high renal blood flow does not reflect a high O2 consumption, kidneys utilize 8% of the total O2 consumption of the body.

This high blood flow is related to the homeostatic function of the kidney which allows a high rate of glomerular filtration, out of 700 ml of plasma flowing through the glomeruli 120 ml are filtered into the capsule; 99% of the filtrate is reabsorbed by the renal tubules leaving behind unwanted substances to be excreted in the urine.

Pressures in the renal circulation

On the other hand, the low-pressure capillary bed in the peritubular capillary system acts at a mean capillary pressure of about 13 mmHg which allows rapid absorption of fluid because of the high osmotic pressure of plasma.

Histological structure of the nephron

Components of the renal corpuscle

a. The Bowman’s capsule: made up of:

b. The glomerulus: on entering the renal corpuscle the afferent arteriole divides into a tuft of fenestrated glomerular capillary lobes, invaginated into the Bowman’s capsule.

Filtration barrier of the kidney

It is the barrier formed by components of the renal corpuscle for the purpose of formation of an ultrafiltrate containing the unwanted waste products and conserving the valuable molecules in plasma. Therefore, filtration occurs through the following structures:

2. Histological structure of the renal tubules

The PCT begins abruptly at the urinary pole of Bowman’s capsule, This part is responsible for obligatory reabsorption of most of the glomerular filtrate.

B. Loop of Henle

The loop of Henle plays a key role, in coordination with the vasa recta and renal interstitium in the medulla, for the mechanism of urine concentration. The loop of Henle has four segments that differ in their lining epithelium and the degree of permeability to water, salts, and urea. These are:

2. & 3. The thin descending and the thin ascending limbs: take a U-shaped course in the medulla and are lined by simple squamous epithelium with few organelles.

4. The thick ascending limb: this segment is the straight part of the distal convoluted tubule with its lining epithelium. It enters the cortex, running in the medullary ray, where it comes in close contact with the vascular pole of the renal corpuscle of its own nephron to form the macula densa of the juxtaglomerular apparatus, and then it becomes the distal convoluted tubule.

The thick ascending limb of the loop of Henle enters the cortex to mark the beginning of the DCT. This segment is responsible for facultative reabsorption of water and electrolytes (aldosterone-dependent) and shares in the acidification of urine.