Properties of nerves, Excitability & directions of conduction in the nerve impulse

A nerve fiber or axon is a long, slender projection of a nerve cell, or neuron, invertebrates, It conducts electrical impulses known as action potentials away from the nerve cell body. The axon can transmit information to different neurons, muscles, and glands. Nerve fibers are three types which are group A nerve fibers, group B nerve fibers, and group C nerve fibers.

Excitability changes in a nerve during activity

Excitability is the power of responding to a stimulus, and stimulus is a sudden change in the external or internal environment. stimuli may be electrical, chemical, mechanical, or thermal.

The effectiveness of a stimulus depends on:

The rate of its application of the stimulus

The sudden application of a current of certain intensity is more effective than if it is gradually applied. Gradual application of the stimulus leads to accommodation or adaptation, which means that the excitable tissue has become used to the passage of the current.

The strength and the duration

These two factors are interdependent; their relation to the effectiveness of the stimulus is best illustrated by the strength-duration curve. In this curve, the strength of the current is plotted against the minimal time needed by that current to excite.

It is used to compare between the excitability of different tissues and of the same tissue under different conditions. For simplification, comparisons are made by choosing one point on the curve, the duration of which is called chronaxie.

Chronaxie is the minimal time needed by double rheobasic strength to excite the tissue. The shorter the chronaxie, the greater is the excitability.

Factors affecting the excitability of the nerve fiber

Any factor which increases the permeability of the membrane in the nerve fiber to Na+ ions leads to an increase of its excitability and vice versa.

The concentration of ions in the extracellular fluid (ECF)

Once a spike potential is propagated by a nerve, it is accompanied by changes in excitability. The conduction of nerve impulse alters the excitability of the fiber in the following order:

During which the excitability is abolished, and no other stimulus whatever its strength may be, can excite the nerve fiber. This is due to the fact that the membrane is in the depolarized state and it must be repolarized before it can respond to a second stimulus. The ARP coincides with the duration of the ascending limp of the spike and the upper third of the descending limp.

During this period the excitability is being recovered, but still, below the normal level, a stronger stimulus is needed to excite the fiber during this period, and the impulse generated is of smaller magnitude and lower velocity. The RRP coincides with the remaining part of the descending limb of the spike.

Properties of the nerve

Conduction of nerve impulses is the only function of the nerve. Nerve fibers can be excited at any part along their length and can conduct impulses in both directions. Action potential does not decrease in strength with distance.

Conduction or propagation of an action potential on an excitable membrane excites the adjacent portion of the membrane.

Conductivity is of 2 types: 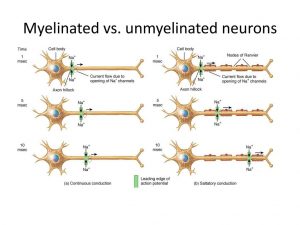 When an effective stimulus is applied to a certain point on the surface of a nerve fiber, the excited point develops increased permeability to Na+ ions leading to depolarization of this area of the membrane, and the nerve impulses is conducted along with the nerve fiber.

The directions of conduction in the nerve impulse

The myelin sheath is highly insulator to the passage of electric current and ions. The nodes of Ranvier are characterized by:

The distance between the nodes is short enough that local current can flow between an active node and an adjacent inactive node before dying off. when an action potential occurs at one node, local current flow between this node and the oppositely charged adjacent node reduces the adjacent node’s potential to the threshold so that it undergoes sn action potential and so on. Consequently, in myelinated fibers, the impulse ”jumps” from node to node skipping over the myelinated sections of the axon.

Saltatory Conduction = jumping of depolarization from one node to another node.