The nervous system is the master controlling and communicating system of the body. This system is responsible for sending, receiving, and interpreting information from all parts of the body. It monitors and coordinates internal organs functions and responds to changes in the external environment.

Nerve and muscle are called excitable tissues because they respond to stimuli (electrical, mechanical, or chemical) when they are excited. The nerve is an excitable tissue, which receives stimuli, processes them, and transmits signals to target tissues to integrate the functions of the whole body.

Muscle is an excitable tissue, which contracts in response to specific stimuli. Its function is to produce force and cause motion, either locomotion or movement within internal organs. A characteristic feature of an excitable tissue is the presence of resting membrane potential.

RMP is the potential difference created across the cell membrane by the metabolic processes of the fiber during rest. 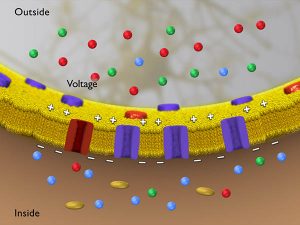 A peculiar characteristic of all living cells is that there is always an electric potential difference between the outer and inner surfaces of its membrane. If a microelectrode is inserted in a living cell and another electrode is applied to its outer surface, a current flows from outside to the inside of the fiber at rest, which shows that the outside of the fiber is positively charged relative to the inside i.e. the membrane is in the polarized state.

Cause of RMP: RMP is caused by unequal distribution of electrically charged ions on both sides of the membrane with the prevalence of cations at the outer surface and anions at the inner surface

Factors of RMP involved in the production of RMP

Selective permeability across the cell membrane

1. The chief ions on the outer surface of the membrane are: Na+, Cl‾, HCO3‾, with a small amount of K+ and proteins.

Under resting conditions, the permeability of the membrane to various ions is a matter of selection. It contains leak channels, which allow certain ions to pass and severely prevent the others. Every channel is specifically selective for the passage of one or more ions.

The permeability of the membrane to K+ ions is 50-100 times more than its permeability to Na+ ions. In view of concentration gradient during rest, Na+ ions try to pass from extracellular to intracellular space and K+ ions do the reverse. In the resting state, the negative interior of the cell is due to a much greater diffusion of K+ out of the cell than Na+ diffusion into the cell. So, potassium ions play the most important role in generating the resting membrane potential.