The cranial nerves connect the muscles and sense organs of the head and thoracic region directly to the brain, they are made up of motor neurons, sensory neurons, or both, They arise from the cerebrum or brainstem and leave the central nervous system through cranial foramina rather than through the spine, They are named and numbered (according to their location, from the front of the brain to the back), They are named for their function or structure.

The facial nerve has a motor root and a sensory component, The facial nerve emerges on the anterior surface of the brainstem between the pons and the medulla oblongata, The roots pass laterally in the posterior cranial fossa with the vestibulocochlear nerve and enter the internal acoustic meatus in the petrous part of the temporal bone, At the bottom of the meatus, the facial nerve enters the facial canal that runs laterally through the inner ear.

On reaching the medial wall of the middle ear (tympanic cavity) the nerve expands to form the sensory geniculate ganglion, The facial nerve then bends sharply backward, At the posterior wall of the middle ear, bends down on the medial side of the aditus of the mastoid antrum, The facial nerve descends to emerge from the temporal bone through the stylomastoid foramen.

The facial nerve now passes forward through the parotid gland, Here, it gives off the terminal branches that emerge from the anterior border of the gland and pass to the muscles of the face and the scalp.

Branches of the facial nerve

The vestibulocochlear nerve is a sensory nerve that consists of two sets of fibers: vestibular and cochlear, They leave the anterior surface of the brainstem between the pons and the medulla oblongata, They cross the posterior cranial fossa and enter the internal acoustic meatus with the facial nerve. 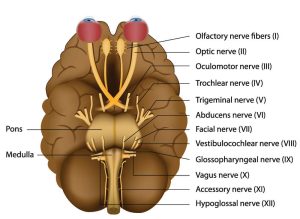 The glossopharyngeal nerve is a motor and sensory nerve, It emerges from the anterior surface of the medulla oblongata between the olive and the inferior cerebellar peduncle, It passes laterally in the posterior cranial fossa and leaves the skull by passing through the jugular foramen, The superior and inferior sensory ganglia are located on the nerve as it passes through the foramen.

Branches of the glossopharyngeal nerve

The vagus nerve consists of the motor and sensory fibers, It emerges from the anterior surface of the medulla oblongata between the olive and the inferior cerebellar peduncle, The nerve passes laterally through the posterior cranial fossa and leaves the skull through the jugular foramen.

The vagus nerve has both superior and inferior sensory ganglia, At the inferior ganglion, the cranial root of the accessory nerve joins the vagus nerve and it is distributed mainly in its pharyngeal and recurrent laryngeal branches, The vagus nerve descends in the neck within the carotid sheath between the internal jugular vein and the internal carotid artery.

At the level of the upper border of the thyroid cartilage, it lies between the internal jugular vein and the common carotid artery in the carotid sheath, It passes through the mediastinum of the thorax, passing behind the root of the lung, and enters the abdomen through the esophageal opening in the diaphragm as anterior and posterior gastric nerves.

Branches of the vagus nerve in the neck

It is a motor nerve. It consists of cranial & spinal roots:

The two roots unite and leave the skull through the jugular foramen, The roots then separate:

It is a motor nerve, It emerges on the anterior surface of the medulla oblongata between the pyramid and the olive, crosses the posterior cranial fossa, and leaves the skull through the hypoglossal canal, The nerve then passes downward and forward in the neck and crosses the internal and external carotid arteries to reach the tongue, In the upper part of its course, it is joined by C1 fibers from the cervical plexus.

Branches of the hypoglossal nerve

The hypoglossal nerve thus innervates the muscles of the tongue (except the palatoglossus) and therefore controls the shape and movements of the tongue.

It is a nerve loop which lies close to the lateral side of the carotid sheath/It is formed of 2 limbs or roots:

The 2 limbs unite to form a nerve loop, the ansa cervicalis, lateral to the carotid artery and carotid sheath opposite the lower part of the larynx and undercover of the sternomastoid

The ansa gives the following branches