These nerves, and cells, are called neurons, they send messages throughout your body. All nerves are important for proper day-to-day functioning, but there are two groups of nerves chiropractors focus on the most: cranial and spinal nerves.

Changes occurring in a nerve during activity

The electrical changes accompanying the propagation of excitation waves are called the action potential. These changes can be recorded by two microelectrodes, one electrode is placed on the outer surface of the membrane and the other on the inner surface, and the following changed are shown:

The duration of the latent period is proportionate to the distance between the stimulating and recording electrodes and inversely proportionate to the speed of conduction. By dividing the distance between the stimulated and the recording points over the duration of the latent period we get the speed of nerve impulses.

Spike potential is a large wave of short duration, which is synchronous with the passage of excitation waves along the nerve fiber. It consists of:

Causes of after hyperpolarization

Thus, 2 positive ions (Na+ and K+) are present on the outer surface of the nerve creating a state of hyperpolarization. The whole sequence of potential changes is called the action potential, the spike lasts 2-4 msec. Repolarization restores the resting electrical conditions of the neuron but does not restore the resting ionic conditions. Ionic redistribution is accomplished by the sodium-potassium pump following repolarization.

All or none rule (All or nothing principle)

The all or non-rule can be also applied to each single muscle fiber inside a bundle of skeletal muscle fibers supplied by the same neuron (motor unit), cardiac muscle, and certain types of smooth muscles with gap junction.

We can’t apply the same principle on the mixed nerve trunk and the whole skeletal muscle, because increasing the intensity of the stimulus from threshold or minimal to maximal increases the magnitude of the response. Subthreshold stimuli give no response at all.

It is noted that the single fiber inside the nerve trunk or the motor unit in a whole skeletal muscle obeys the all or non-rule. The gradual increase in the response in the case of nerve trunk and the whole skeletal muscle depends on the number of the stimulated or activated fibers by threshold or submaximal, i.e when the stimuli are of threshold intensity, the most excitable fibers are stimulated and a small action potential is recorded.

As the intensity of the stimulus increases the magnitude of the action potential shows a proportional increase until the stimulus is strong enough to stimulate all nerve fibers present in the mixed nerve. So, maximal stimulus excites all the fibers giving maximal response and no more.

Subthreshold stimuli are not able to produce an action potential, but they don’t pass without any effect they produce a graded potential which has the following characteristics: 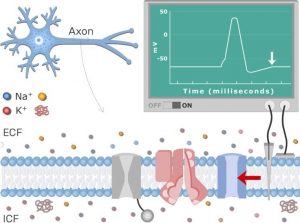 When a mixed nerve trunk (containing motor and sensory fibers including myelinated and non-myelinated fibers) is stimulated, the spike potential was found to be of a compound nature, it is made up of several waves.

The different fibers in a nerve trunk conduct at different velocities and the impulses proportionated by them are separated according to their relative velocities.

The compound nature of the potential in a mixed nerve trunk is analyzed into 3 main waves A, B, and C. Each wave belongs to a group of fibers, group A conducts faster followed by B and lastly Group.

The A group is further subdivided into alpha, beta, gamma, and delta; the faster fibers give spikes of higher magnitude and shorter duration. these differences are related to differences in the diameter of the fibers.

Generally speaking, it can be stated that the larger the diameter, the greater is the velocity of conduction; the bigger is the magnitude of action potential and the shorter is the duration of the spike.