The most important endocrine glands in the human body

The gland is a group of cells which produces and secretes or gives off chemicals , The gland selects and removes the materials from the blood , processes them , and it secretes the finished chemical product for use somewhere in the body . 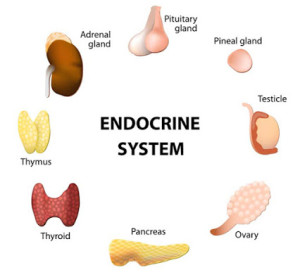 Thyroid gland is located in the front surface of the neck on both sides of the trachea , It consists of two lobes , linked together by a small part , It secretes two hormones which are Thyroxin hormone and Calcitonin hormone .

Thyroxin hormone plays a main role in food assimilation processes in the body , where it liberates the energy necessary for the human body from the food , Calcitonin hormone controls the level of calcium in the blood .

There are four parathyroid glands that are embedded in the rear surface of Thyroid gland , It controls many body functions including the heart rate , the temperature and the metabolism , These glands play a role in the metabolism of calcium in the body .

Simple goiters are more common in the people over age 40 , the people with a family history of goiter & in the women , The main symptom is the enlarged thyroid gland , The size may range from the single small nodule to the  large mass at the front of the neck .

It is the enlargement of thyroid gland accompanied by loss of the weight , the tension and the exophthalmoses , If the thyroxin hormone secretion is increased in great amounts , It will cause the exophthalmic goiter .

Adrenal glands are located adhering by the top of the kidney , The adrenal glands secrete the adrenalin hormone which stimulates the body’s organs to respond to the  emergencies .

Each of the adrenal glands weighs about 4 grams and it is about the size of your thumb , They are situated just above the kidneys and they consist of two parts , the adrenal medulla and the adrenal cortex , They produce the hormones that are essential for the life and they help us cope with the stress .

Glucagon hormone raises the level of sugar in the blood by stimulating liver to convert the stored glycogen into glucose that releases into the blood stream to be available to the body cells , ( Its function contradicts the function of Insulin hormone .

The pancreas is a double function gland because the pancreas acts as ductless gland which secretes the insulin and glucagon hormones that regulate the glucose sugar level in the blood and it also secretes the digestive enzymes that help in the digestion process through a duct .

The two testes secrete the testosterone hormone which is responsible for the appearance of the male secondary sex characters , They are situated in a pouch that hangs outside the male body , Two testes produce the hormones necessary for the production of the sperm and the other male sexual characteristics .