Retina function, anatomy, layers and accessory structures of the eye

The retina lines the back of the eye on the inside, It is located near the optic nerve, It receives the light that the lens has focused, convert the light into neural signals, and send these signals on to the brain for visual recognition, The retina processes the light through a layer of photoreceptor cells, These are light-sensitive cells, responsible for detecting qualities such as color & light-intensity, The retina processes the information gathered by the photoreceptor cells and sends this information to the brain via the optic nerve.

The retina: this is the inner coat of the eyeball. It consists of two basic layers:

Histologically, the retina is formed of 10 parallel layers, which are from outside inward:

It consists of a single layer of cuboidal cells. The cell base has numerous invaginations and the cell apex, which faces the rods and cones, shows multiple microvilli that surround the tips of the photoreceptors.

Functions of the RPE & its relation to the histological structure:

2. Layer of rods & cones (The photoreceptors)

This layer contains the outer and inner segments of the photoreceptor cells; rod and con cells. There are about 120 million receptor cells in each retina; the ratio of rods to cones is 20:1. Rods and cones elongated modified neurons oriented parallel to one another but perpendicular to the retina.

It is not a true membrane. It is formed by the junctional complexes between the photoreceptor cells and the supporting Müller’s cells.

It contains the cell bodies of rod and cone cells. Nuclei of rods are small, dark, and found at different levels while the cone nuclei are large, pale, and found at one level near the outer limiting membrane.

It contains the synapses between the synaptic processes of rod and cone cells and the dendrites of the bipolar and Horizontal cells.

It contains the cell bodies of the following cells:

This layer is formed by the synaptic neuronal connections between the bipolar and amacrine cells axons with the dendrites of ganglion cells.

This layer contains cell bodies of retinal ganglion cells. They form a single layer of few large pyriform neurons. Their axons converge to form the optic nerve fibers. The retinal blood capillaries are present between the ganglion nerve cells.

In this layer, the axons of the ganglion cells pass at right angles to form the optic nerve. They pierce the sclera at the lamina cribrosa. Optic nerve fibers are myelinated by oligodendrocytes (without neurilemma).

It limits the retina from inside, separating it from the vitreous. It is made up of the basal lamina of the Müller’s cells. 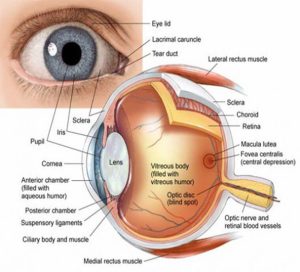 Structures of the eye

The accessory structures of the eye

It is a thin transparent mucous membrane. It covers the anterior surface of the sclera till the cornea (bulbar conjunctiva), then it is reflected at the conjunctival fornix to cover the internal surfaces of the eyelids (palpebral conjunctiva). The conjunctiva consists of stratified columnar epithelium with numerous goblet cells. supported by loose vascular lamina propria.

Conjunctival epithelium changes into non-keratinized stratified squamous at the junction with the cornea and near the margins of the eyelids. The function of the conjunctiva is to lubricate and defend the eye against infection.

They are two movable folds of tissues that protect the eye. Eyelashes project from the lid margin. Histologically, the eyelid is formed of the following layers:

Smooth muscle fibers of the superior tarsal muscle (Muller’s muscle), it is inserted in the superior border of the tarsal plate and is supplied by sympathetic nerves.

Meibomian glands: these are modified long sebaceous glands embedded in the tarsal plate. They open on the free edge of the eyelid. Their oily secretion prevents rapid evaporation of the tears.

It is formed of the lacrimal glands (serous acini secreting tears that moisten and protect the corneal surface). It is located in the anterior superior portion of the orbit. The secretion is continuously drained into the lacrimal canaliculi, lacrimal sac, and finally into the nose through the nasolacrimal duct.