The cytoplasm is sometimes described as the non-nuclear content of the protoplasm, It is the semi-viscous ground substance of the cell, It is the substance of life, it serves as a molecular soup, in the cytoplasm, all the cellular organelles are suspended and are bound together by a lipid bilayer membrane, All the cellular contents in prokaryotes are contained within the cell’s cytoplasm, In eukaryote organisms, the nucleus of the cell is separated from the cytoplasm.

The main components of the cytoplasm are Cytosol which is a gel-like substance, Organelles which are the cell’s internal sub-structures, and various cytoplasmic inclusions. The cytosol mainly consists of cytoskeleton filaments, organic molecules, salt, and water, It is a gelatinous fluid, where the other components of the cytoplasm remain suspended. All the volume of such substance outside the nucleus and inside the plasma membrane is cytoplasm.

It is a non-membranous organelle found close to the nucleus.

They are metabolically-inert transient components of the cytoplasm. They represent stored material or byproducts of metabolism. 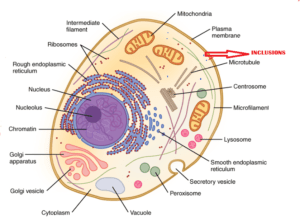 Carbohydrates are stored in all animal cells in the form of glycogen mainly in the liver and muscle cells.

EM picture: It is visible as dense granules, larger than ribosomes. In the cytoplasm of hepatocytes, glycogen appears as rosette-shaped aggregates.

They serve as an energy source and can be used by the cell for synthesis of membranes and other lipid-rich structured components e.g. steroid hormones. Most of the lipids stored in the body are in the adipocytes, many other cell types contain few small lipid droplets.

Endogenous pigments (formed in the cells) as:

Exogenous pigments (introduced into the cells) as: