Sense of vision is one of the most important sensory functions, It serves as the basis for our perception of the external world, About 70% of all sensory receptors are in the eyes, and nearly half of the cerebral cortex is involved in some aspect of visual processing.

Refractive media of the eye

They are the structures that focus light rays entering the eye on the retina. The refractive power of 4 & 2 equal 7 diopters but they are usually negligible. The total refractive power of the human eye will be approximately 60 diopters when the lens is at rest i.e. looking for objects at a distance of 6 meters or more.

Since the refractive index of air is 1.0 and the differences between the indices of the cornea, aqueous and vitreous humor are little, the chief refractive media of the eye are the cornea and the lens.

The cornea as a refractive medium of the eye 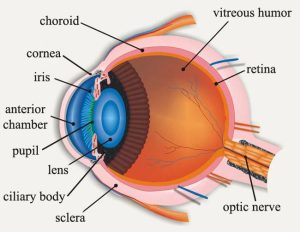 Structures of the eye

The cornea plays an important role in eye protection. The corneal reflex protects the eye from the entrance of foreign bodies. This is a reflex closure of the eye on touching the cornea with any foreign body.

Pathway of the corneal reflex

The lens provides about 18 diopters (about 1/3) of the total refractive power of the optical system of the eye at rest (without accommodation). However, it can increase its power to enable the person to see near objects by accommodation.

The stimulus for accommodation:

The main mechanism of accommodation is ciliary muscle contraction, In an unaccommodated state, resting tension on the zonule at the lens equator holds the lens in a relatively flattened state, When the ciliary muscle contracts, the resting zonular tension is released and the lens is allowed to round up through the force exerted on the lens substance by the lens capsule, The lens anterior and posterior curvatures increase to increase the optical power of the lens.

The near reflex starts where eyes are directed from a distant to a near object. The reflex is Initiated by blurring of the retinal image. The near reflex has three components:

Pathway of the near reflex

The stimulus: is the blurred image.

The receptors: are the photoreceptors (rods and cones).

The afferent: impulses travel from the retina through the optic nerve, optic chiasma, optic tract, lateral geniculate body, and optic radiation to the visual cortex. The visual cortex is connected to the frontal cortex. From there, the cortical fibers descend via the internal capsule to the (center) oculomotor nuclei in the midbrain. Some of these descending fibers synapse with parasympathetic nuclei (Edinger-Westphal nuclei) of the oculomotor nerve on both sides.

The effect of age on accommodation: the nearest point to the eye at which an object can be brought into clear focus by accommodation is called the near point of vision. With advancing age, there is a decline in accommodation power due to hardness in the lens substance.

So, the near point of vision recedes throughout life from 9 cm at the age of 10 to about 83 cm at the age of 60. This condition is called presbyopia. As a result of this recession, close work becomes difficult at the age of 45-40 unless vision is corrected reading glasses that uses convex lenses.

Pathway of the light reflex

The stimulus: light reflex is initiated by stimulation of the visual receptors by light.

The center: the light reflex fibers leave the optic tract before it reaches the lateral geniculate body to relay in the pretectal nuclei of the midbrain. From each pretectal nucleus, impulses pass through the tectonuclear tract to Edinger-Westphal nuclei of the oculomotor nerve on both sides (the tectonuclear tract passes near the aqueduct of Sylvius).

The efferent: preganglionic fibers pass through both oculomotor nerves to relay in the ciliary ganglia.

The effectors: postganglionic fibers enter the eye through the short ciliary nerves, to end in the sphincter pupillae muscles of both eyes causing constriction of both pupils (the response is miosis in both eyes).

The consensual light reflex is explained by the partial decussation at the optic chiasma and by bilateral innervation of the Edinger-Westphal nuclei from each pretectal nucleus. The pathway of light reflex is subcortical and can be retained when there is a bilateral cortical lesion causing blindness.

The lesion in the pretectal area near the aqueduct Sylvius due to syphilis, diabetes, or brain tumor produces Argyll Robertson pupil where the light reflex is lost due to destruction of tectonuclear tracts, but the near response is present because its pathway is intact.