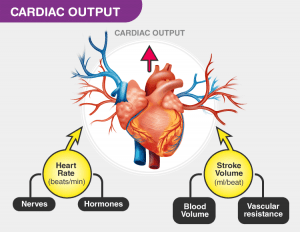 The cardiac output may decrease rather than increase. This is explained on the bases that the normal diastolic time in a person with an average heart rate of 70 beats/min is 0.5 sec. During this period, coronary and heart filling takes place. Too much increase in heart rate shortens the diastolic time and decreases the end-diastolic volume, the force of contraction, and stroke volume. This results in decreased cardiac output.

Stroke volume: When the stroke volume is increased, it would increase the cardiac output, provided that the heart rate is unchanged

The stroke volume depends on preload, afterload as well as myocardial contractility. The preload is proportionate to the end-diastolic volume, while the afterload is the resistance against which blood is expelled (arterial blood pressure).

When the venous return is increased, the cardiac output will increase through the following mechanisms:

I- The relation between ventricular stroke volume and end-diastolic volume through the Frank-Starling curve. When an extra amount of blood flows into the ventricles, the cardiac muscle itself is stretched to a greater length. This in turn causes the muscle to contract with increased force. Therefore, the stroke volume is increased.

II- Stretch of the right atrial wall increases the heart rate by the atrial stretch receptor reflex; this, too, increases the cardiac output. Factors affecting the amount of blood returning to the heart likewise influence the degree of cardiac filling during diastole. Several mechanisms help to return the venous blood back to the right atrium:

2. The skeletal muscle pump: the skeletal muscles are called the peripheral heart because they exert a muscle tone that compresses the veins and allows venous return. This is enhanced with muscular exercise due to increased muscle contraction.

5. The presence of valves in the veins: this prevents the blood from returning back & keeping it directed to the heart. (The valves are not present in the big veins, very small veins, the veins in the GIT and brain).

6. The inspiratory pump: inspiration increases the intra-thoracic pressure negativity and the venous return.

7. Sympathetic stimulation causes constriction of the veins plus the other blood reservoirs (pulmonary veins, spleen & veins in the GIT).

All these factors increase the venous return, the end-diastolic volume, the stroke volume & the cardiac output.

Myocardial contractility is affected by the following factors:

Starling mechanism & sympathetic stimulation increase myocardial contractility, but they do not use the same pathways. Sympathetic stimulation makes its effect by increasing the amount of Ca2+ entry from the extracellular fluid, thus increasing the intracellular calcium, while the Starling mechanism increases the sensitivity of the myocardial fiber to whatever Ca2+ may be there.

You can download the application on google Play from this link: Science online Apps on Google Play