Parasites live off other organisms, or hosts, to survive, Some parasites don’t affect their hosts, and others grow, reproduce, or invade organ systems that make their hosts sick, resulting in parasitic infection. Malaria is one of the deadliest parasitic diseases, Common parasitic infections include trichomoniasis, giardiasis, cryptosporidiosis, and toxoplasmosis.

This can be achieved by:

This is based on the examination of excreta, body fluids, and tissues and the visualization of the different diagnostic stages of parasites. The samples examined are the following: 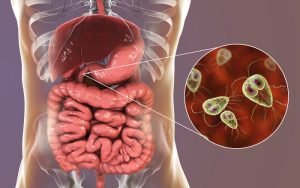 The collection of samples should be in a wide-mouthed container with a screw top. The sample should not be contaminated with urine or water, since urine can destroy some parasites and water may contain ciliates which can cause false diagnosis, Care is also taken that the patient is not taking antibiotics or had performed a barium enema; both will mask, any parasitic infection. Three stool samples should be examined as one sample every other day.

It is used to study the motility of protozoa if the stool sample is examined within one hour after discharge. Helminthic eggs may also be seen if they are present in large numbers.

In this method, stool samples are emulsified in a 1% iodine solution, The iodine stains the cysts of protozoa revealing their details. Its main disadvantage is that the trophozoites are rapidly killed by the iodine and therefore become non-motile.

Principle: most helminthic eggs and protozoal cysts are heavier than suspending liquid so they sink and concentrate at the bottom of the tube.

Principle. This involves the use of solutions, which have higher specific gravity than the organisms to be floated so that the organisms rise to the top and the debris sinks to the bottom. The floatation procedure permits the separation of protozoan cysts and eggs of some helminths by using concentrated saline or zinc sulphate 33%, The main disadvantage is that heavy and operculated eggs do not concentrate well with this technique.

These can be used identification intestinal protozoa.

The correlation of egg production with adult worm burden is possible, Estimation of the intensity of infection of schistosomes as a test cure after treatment also important.

A portion of a sieved stool sample is transferred to a hole of the template on a slide, The eggs are then counted and the number per gram of faeces is calculated.

This is used to diagnose parasitic infections by perianal swabs using the adhesive surface of cellophane tape, which is then placed on a microscopic slide. The examination is best done in the morning before bathing.

The colour of urine can aid in the preliminary diagnosis of a parasitic infection.

Urine is collected in a clean conical glass receptacle. The urine sample is concentrated either by centrifugation, or it is left for 15-20 minutes to allow any suspended material to sediment. With a pipette, a drop of the sediment is placed on a clean slide and examined microscopically.

Membrane Filtration Technique: It is used for the concentration of eggs using a nucleopore filter, This test can be used to detect Schistosoma haematobium eggs in urine.

This is a non-invasive method for sampling duodenal contents. The device consists of a length of nylon thread in a gelatin capsule. The thread protrudes through one end of the capsule and is taped to the side of the patient’s face, The capsule is swallowed, and the thread is retrieved 4 hours, Bile-stained mucus is scraped off in a petri-dish, which is then examined microscopically.

The bone marrow is aspirated from the sternum in adults and the iliac crest in children.

Material aspirated should be from the edge of the ulcer not from the floor. It is important that the surface of the ulcer be thoroughly cleaned before specimens are taken as any contamination of material with bacteria or fungi may prevent organisms from growing culture, Part specimen taken should be placed on a side and stained with Giemsa. The other part should be put in a cultural medium.

If the sample shows rusty brown particles, an un-concentrated sample from these particles is examined first. To dissolve excess mucus, add an equal volume of 30g/L NaOH solution.

Tissue biopsy specimens are recommended for the diagnosis of a number of parasites as rectal and muscle biopsies. In cutaneous lesions e.g., leishmaniasis ulcers, skin scraping with microscopic analysis and punch biopsies with tissue-impression smears can also be diagnostic as the previously mentioned needle aspiration technique under the same conditions and precautions.

Two types of blood films can be made: thin and thick blood films, Thick blood films have the advantage that a larger amount of blood is examined which increases the possibility of detecting light infections. However, thin blood films show morphological characteristics better.

The buffy coat is the layer of white cells resulting from the centrifugation of whole citrated blood. A thin film is prepared from the cells of the buffy coat examined after staining with Giemsa.

This technique is based on concentration by centrifugation and the addition 2% formalin solution. The sediment will then be stained by Giemsa and examined microscopically.