Control of the blood flow to the tissues is achieved by changing the diameter of the arterioles. The diameter of the arterioles in active tissues is regulated and adjusted by locally produced vasodilator metabolites; in addition, it is regulated systemically by circulating vasoactive substances and by the sympathetic nervous system, Systemic regulatory mechanism acts at the same time with the local mechanisms and it adjusts vascular responses throughout the body.

Local control of arteriolar diameter is carried out by

It is the capacity of tissues to regulate their own blood flow, It is either myogenic or metabolic

It states that: Vessel wall tension ∝ distending pressure × the radius of the vessel.

So, in order to maintain a given wall tension when pressure rises, a decrease in the vessel radius is required.

The vasodilator substances (metabolites) tend to accumulate in active tissues leading to a proportionate increase in the local blood flow due to vasodilatation. The resulting increase in blood flow tends to wash these metabolites away. The metabolic changes cause relaxation of the arterioles and precapillary sphincters.

Metabolic autoregulation can be either:

When the blood supply to a tissue is blocked for some time, and then the block is released, the resulting flow through this tissue when the circulation is reestablished usually increases about 5 times the normal. The duration of this hyperemia depends upon the duration of the block.

Mechanism: The block of blood supply to the tissue causes the nutrients (including O2) to be consumed and the vasodilator metabolites to accumulate. When the block is released, more blood will flow to the dilated arterioles, metarterioles, and precapillary sphincters.

When any tissue becomes highly active, such as a muscle during exercise, or a gastrointestinal gland during digestion, the rate of blood flow through the tissue increases. This phenomenon is called active hyperemia.

Mechanism: The increase in local metabolism causes the cells to consume the nutrients extremely rapidly, and also to release large quantities of vasodilator substances. This results in dilatation of local blood vessels and an increase in local blood flow. In this way, the active tissue will receive the additional nutrients required to sustain its new level of function.

If the tissue metabolism of a certain area becomes abnormal (increased or decreased) or its local blood supply is changed, the long-term metabolic autoregulatory mechanisms automatically readjust the local blood flow over a period of weeks or months.

In young persons, this degree of readjustment is usually very exact; in old persons, it is only partial, The underlying mechanism of increased blood flow is that the resulting hypoxia will stimulate the production of certain factors causing angiogenesis (increased tissue vascularity and the development of collaterals).

Vaso-active substances secreted by the endothelium or the platelets

a. Prostacyclin: it is produced by endothelial cells. It inhibits platelet aggregation and promotes vasodilatation.

NO is synthesized from arginine in a reaction catalyzed by nitric oxide synthase (NO synthase, NOS). Many vasodilator substances act through releasing of NO [e.g. acetylcholine, bradykinin, vasoactive intestinal peptide (VIP), and substance P]. Tonic release of NO is essential for maintaining normal arterial blood pressure.

c. Endothelins: Three endothelins are identified (1, 2, and 3), Endothelin-1is produced by endothelial cells, It is one of the most potent vasoconstrictor agents, It appears to be primarily a local paracrine regulator of vascular tone, It contracts vascular smooth muscles; veins are more sensitive than arteries.

d. Thromboxane A2: it is produced by the platelets. It promotes platelet aggregation and vasoconstriction.

The balance between platelet thromboxane A2 and prostacyclin enhances localized platelet aggregation and consequent clot formation while preventing excessive extension of the clot and maintaining blood flow around it.

The balance between platelet thromboxane A2 and prostacyclin enhances localized platelet aggregation and consequent clot formation while preventing excessive extension of the clot and maintaining blood flow around it.

Systemic control of the arterioles (extrinsic control) is carried out by hormonal (Humoral) and nervous mechanisms.

Stimulation of the sympathetic nervous system not only causes direct nervous excitation of blood vessels and the heart, but also causes release by the adrenal medulla of norepinephrine and epinephrine into the circulating blood.

These two hormones circulate to all parts of the body and cause essentially the same rapidly acting effects on the circulatory system as direct sympathetic stimulation.

That is, they excite the heart, constrict most of the blood vessels, and constrict the veins. Norepinephrine has a generalized vasoconstrictor action, whereas epinephrine dilates the vessels in skeletal muscles and the liver. 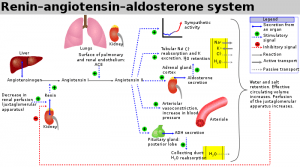 The hormone angiotensin II is one of the most potent vasoconstrictors known. Whenever the arterial pressure falls very low, large quantities of angiotensin II appear in the circulation. This results from a special mechanism involving the kidneys leading to the release of the enzyme renin from the kidneys when the arterial pressure falls or extracellular fluid volume (ECF) volume is reduced.

Renin itself is an enzyme that splits the end of one of the plasma proteins, called angiotensinogen or renin substrate, releasing a decapeptide, angiotensin I. Reini persists in the blood for as long as one hour and continues to cause the formation of angiotensin I during the entire time.

Within a few seconds, after the formation of angiotensin I, two additional amino acids are split from it to form the octapeptide angiotensin II. This conversion occurs almost entirely in the endothelial cells of the lungs, catalyzed by an enzyme called Angiotensin-converting enzyme (ACE). Angiotensin II persists in the blood for a minute or so, then it is rapidly inactivated by a number of different blood and tissue enzymes collectively called angiotensinases.

During its persistence in the blood, angiotensin II has several effects aiming to elevate the arterial pressure and to increase the ECF volume.

It is the most potent vasoconstrictor substance. Vasopressin is formed in the hypothalamus and stored in the posterior pituitary gland. It is released into the circulation when the osmotic pressure of blood is increased (e.g. in dehydration or high salt intake), it is also released when stimulation of atrial B receptors is reduced (e.g. hypovolemia).

Its secretion is inhibited by increased activation of arterial baroreceptors. Vasopressin has a marked constrictor effect on the systemic and renal arterioles; moreover, it reduces urine formation by the kidney that is why this hormone is called antidiuretic hormone.

b. Vasodilator hormones: include kinins and atrial natriuretic peptide

Bradykinin and Lysylpradykinin (kallidin) are two vasodilator peptides found in the body. The actions of kinins resemble those of histamine:

It is released in the circulation when the ECF volume increases or during water immersion as it increases the venous return and the atrial walls are then stretched. It is an important regulator of blood volume and blood pressure.