Retinal receptors absorb light and start the electrophysiological process that sends visual signals to the brain, The retinal receptors are the only structures that can sense light stimuli. Visual acuity is decreased by this long passage. However, in the central part of the retina, the initial layers are pulled aside, this allows light to fall directly on the receptors.

The receptors of the retina are rods and cones, which are adjacent to the pigmented epithelium. There are about 120 million receptor cells in each eye; the ratio of rods to cones is 20:1. Although, the total number of rods is much more than that of cones, there is a small area in the central retina which has more cones than rods.

The rods and cones of the retina receive light signals and transduce them into electric impulses which are amplified and integrated through a circuit involving bipolar and ganglion cells.

The axons of ganglion cells form the optic nerve, Although there are 120 million rods and cones, there are only about one million ganglion cells, indicating considerable convergence, However, the convergence is much more marked at the periphery than at the center of the retina.

After the light passes through the lens system of the eye and then through the vitreous humor, it enters the retina from the inside, i.e. it passes through the ganglion cells, then the bipolar cells and finally it reaches the layer of rods and cones which are located on the outer side of the retina. The fovea is the part with the highest visual acuity across the retina:

On the other hand, rods are very sensitive to light owing to more convergence along their pathways to bipolar and ganglion cells. They have a low light threshold. They are activated by dim light. They cannot detect details of object form or color. This is called scotopic or peripheral vision. 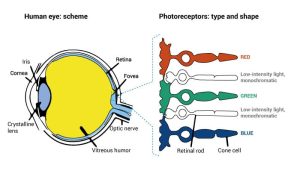 Both the rods & cones contain chemicals that decompose on exposure to the light and hence stimulate the optic nerve fibers.

Rhodopsin is the light-sensitive pigment present in the rods, It is a combination of a protein called scotopsin and a carotenoid pigment called retinine or retinal. In the dark, the retinal is in the cis form (11 cis-retinal), This cis form is the only form that can combine with scotopsin to form rhodopsin, It is one of the G-protein coupled receptors.

B. Decomposition of rhodopsin by light energy

When light energy is absorbed by rhodopsin, the rhodopsin begins to decompose within a very small fraction of a second, forming intermediate compounds till it is transformed into metarhodopsin II, also it is called the activated rhodopsin that excites the electrical changes in the rods, and then impulses are transmitted along the optic nerve to the central nervous system.

Although some replacement of decomposed pigment may take place even in bright light, synthesis of new pigment is primarily a process that takes place in the darkness.

Synthesis of rhodopsin involves the isomerization of all-trans-retinal to 11 cis-retinal, and its combination with opsin in the inner segment of the rods. The newly manufactured rhodopsin migrates to the outer segment where it is deposited on the membranous discs.

Rod receptor potential in the darkness results from dark current between inner and outer rod segments; with the movement of sodium ions in a complete electrical circuit through the inner and outer segments of the rod.

The inner segment continually pumps sodium from inside the rod to the outside and potassium ions are pumped to inside the cell, As in other cells, this sodium-potassium pump creates a negative potential on the inside of the entire cell, However, the outer segment of the rod where the photoreceptor discs are located is entirely different from other sensory receptors.

The outer rod membrane, in the dark state, is very leaky to positive ions mainly sodium ions that flow through cGMP-gated channels if the cGMP level is kept high enough to maintain these gates in the open state, This influx of sodium ions neutralizes much of the negativity on the inside of the entire rod cell, This is called sodium current between inner and outer rod segments.

So, under normal dark conditions, when the rod is not excited, there is reduced electronegativity inside the membrane of the rod, measuring about – 40 millivolts rather than the usual – 70 to – 80 millivolts found in most sensory receptors at rest, This means that the rods are depolarized in the dark with continuous release of neurotransmitter glutamate from synaptic terminals.

D. Steps of phototransduction in rods

When rhodopsin in the outer segment of the rod is exposed to light, transduction of light into an electrical signal occurs through several steps as shown in:

This biochemical cascade undergoes amplification; for example, one photon of light can activate 800 molecules of transducin and so on, but amplification varies with background light.

In bright sunlight, cGMP in rods fall to the point where the response to the light becomes saturated; additional light causes no more hyperpolarization, So, vision during the day depends entirely on the cones, whose photopigments require more energy to be bleached, The process of phototransduction in cones is virtually the same as in rods; the only major difference is in the type of opsins in the membranous disks of outer cone segments.

The color that we perceive is determined by the relative contributions of blue, green and red cones to the retinal signal. Color blindness arises when one or more of the cone photopigment types is/are missing.

The only source of output from the retina to the rest of the brain is the action potentials arising from retinal ganglion cells, Their axons converge on the optic disc and form the optic nerve.