Insulin is a peptide hormone made in your pancreas, a gland located behind your stomach, It enables your body to use glucose for energy, It regulates the metabolism of carbohydrates, fats & protein by promoting the absorption of glucose from the blood into the liver, fat and skeletal muscle cells, Insulin allows your body to store glucose in your liver, fat, and muscles, the pancreas controls the amount of glucose in your bloodstream at any given moment. 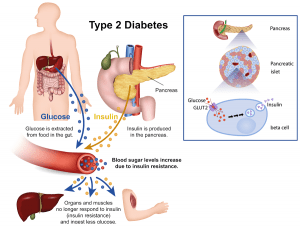 A) Disturbance in carbohydrate metabolism:

B) Disturbances in protein metabolism:

C) The disturbance in fat metabolism which leads to:

Glucagon is a single-chain polypeptide, consisting of 29 amino acids, Glucagon contains no cysteine residues and thus has no disulphide bond.

The kidney and the liver play an important role in the metabolic clearance of glucagon. The liver rapidly inactivates the hormone by enzymatic cleavage of amino acids from the N terminal and of the hormone.

After binding to a specific hormone receptor on the liver plasma membrane, glucagon is internalized and degraded thereafter. The most accepted scheme by which glucagon activates cAMP production is through activation of adenylcyclase enzyme converting ATP to cAMP, which by activating cAMP-regulated protein kinase, mediates the physiologic effect of the hormone.

Thus the G protein releases bound GDP and picks up a molecule of GTP. This allows the α subunit to bind transiently to adenylatecyclase switching on its activity. cAMP, in turn, converts phosphorylase enzyme to its active form and glycogen synthase to its inactive form.

Glucagon is a hyperglycemic hormone. It raises blood sugar levels by increasing:

3- It increases metabolic rate because it increases the hepatic deamination of amino acids.

4- It stimulates the secretion of GH insulin and pancreatic somatostatin.

It is secreted by the delta cells of the islets of Langerhans. Somatostatin is a polypeptide. It is the same chemical substance as growth hormone inhibitory hormone that is secreted in the hypothalamus, All factors related to the ingestion of food will stimulate somatostatin secretion, These include:

So, the principal role of somatostatin is to cause slowing of the assimilation of food from the gut.

It includes single or small groups of endocrine cells with diffuse distribution in different tissues and organs of the body. These cells secrete different hormones, but usually peptides; as they have the capacity to synthesize monoamines by the uptake of amine precursors and their decarboxylation, they are also “APUD cells” (Amine Precursor Uptake and Decarboxylation).

These hormones act in a paracrine (affect activities of neighboring cells). autocrine (on the cell that secreted the hormone itself) or endocrine mode and their function are regulated by nervous control.

These cells are not well seen by routine H&E sections; however, they can be specifically visualized by LM after staining with chromium or silver salts. This provides them alternative names as chromaffin cells and argentaffin cells. More accurately, they are visualized by immunohistochemical staining using antibodies against their peptide hormone products.

By EM they are pyramidal in shape with a narrow apex and a wide base. They have the ultrastructural features of polypeptide secreting cells (rER, mitochondria, Golgi apparatus, and secretory granules) but not in abundance denoting their slower rate and a small amount of secretion. Golgi apparatus is infranuclear and secretory granules are basal to allow the secretion to pass to the underlying fenestrated capillaries. They are of two morphological types:

They are present mainly in the gastrointestinal tract (entero-endocrine cells) and respiratory system. Members of DNES of the endocrine system include: