The immune response activation is faster and stronger in immunized individuals than in unimmunized ones. Immunization of a population can stop the spread of the infectious agent by reducing the number of susceptible hosts (herd immunity) and hence it protects the recipient and the general population. The main property to make a virus candidate for vaccine development is to be the cause of a significant illness.

Live vaccines (LV) are derived from an organism (virus or bacteria) that have been laboratory modified and weakened, so that it is able to replicate in the host and stimulate immune responses without causing any serious disease. This would resemble the natural infection in stimulating both the natural innate and antigen-specific immune pathways so that humoral, cellular, and memory immune responses are developed. 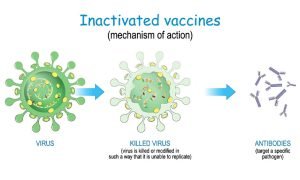 Live vaccines are prepared with avirulent, or attenuated organisms limited in their ability to cause pathology, this may consist of any of the following:

Avirulent viral vector vaccine: Recombinant techniques are used to insert gene coding for the protein of interest into the genome of an avirulent vector virus from other species (e.g., vaccinia virus, adenovirus). On infection, it simply promotes the expression of the inserted gene to initiate an immune response.

Examples of Commonly used protein-based subunit vaccines are the following:

Elicit a response against the pathogen’s capsule which results in anti-capsular antibodies that block the binding of the organism to the mucosal surfaces. E.g: vaccines against Streptococcus pneumoniae, Hemophilus influenzae, Neisseria meningitidis. These polysaccharide molecules are small, and often not very immunogenic. As a consequence, they tend to:

Not effective in infants and young children (under 18-24 months).

2. Induce only short-term immunity (slow immune response, slow rise of antibody levels, produce mainly IgM, no immune memory) because of the inability of polysaccharides to activate T helper cells. So, these vaccines are best conjugated to a carrier protein to enhance the antibody response.

Conjugate subunit vaccines also create a response against the molecules in the pathogen’s capsule, In comparison to plain polysaccharide vaccines, they benefit from a technology that binds the capsular polysaccharide to a carrier protein that can induce a long-term protective response even in infants. E.g., Hemophilus influenzae type b (Hib) and pneumococcal conjugate vaccines.

It uses a molecular-engineered mRNA sequence with a nanoparticle coat.

This mRNA codes for the immunizing specific viral protein.

Once introduced in a host cell, it will be transcribed, and a specific target protein will be expressed on the cell surface.