It is the steroid-secreting portion of the suprarenal gland. Histologically, It is divided into 3 zones: 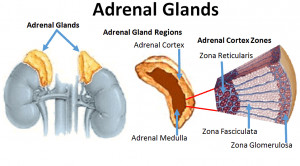 By EM: the cells show the ultrastructural features of steroid secreting cells with few lipid droplets. Lipofuscin pigments are characteristic in this layer.

Aldosterone is a steroid. It is secreted from the zona glomerulosa. It is the most important hormone that regulates Na+ and K+ metabolism, and it combines loosely with the plasma proteins.

Functions of the mineralocorticoid (Aldosterone)

It increases Na+ concentration and decreases K+ concentration in the extracellular fluid by acting on the kidney. Aldosterone increases sodium reabsorption in exchange with the secretion of either K+ or H+ from the distal tubules, collecting tubules and collecting duct. It increases the formation of Na+ K+ ATPase.

Aldosterone increases the reabsorption of sodium and the secretion of potassium by the ducts, The effect on the sweat glands is important to conserve body salt in hot environments and the effect on the salivary glands is necessary to conserve salt when excessive quantities of saliva are lost, Aldosterone also greatly enhances sodium absorption by the intestines, which obviously prevents the loss of sodium in the stools.

The four factors in the regulation of aldosterone secretion are:

Effects of hypersecretion of aldosterone (hyperaldosteronism)