Cytokines are small secreted proteins, that are released by cells and have a specific effect on the interactions and communications between cells, Cytokines are important in cell signaling, Cytokines are peptides and can’t cross the lipid bilayer of cells to enter the cytoplasm, they include chemokines, interferons, interleukins, lymphokines, and tumour necrosis factors.

Cytokines are a large group of molecules involved in signaling between cells during the immune response, They are proteins (usually glycoproteins of low molecular weight).

Cytokines are secreted by many cell types (principally activated lymphocytes, macrophages, and dendritic cells) in response to specific stimuli and they bind to specific receptors on target cells exerting their effect on these cells. Cytokines mediate and regulate immune and inflammatory reactions.

Cytokines include the following:

This is a large group of cytokines that are produced mainly by T-cells, but also by mononuclear phagocytes or by tissue cells, Most are involved in directing other cells to divide and differentiate or their activation during an immune response. Each interleukin acts on a specific limited group of cells that express the correct receptors for that interleukin E.g.IL2: The most powerful activator and growth factor for T-cells. 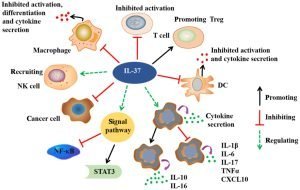 They are secreted mainly by macrophages, These cytokines have local and systemic inflammatory effects on the tissues including induction of fever, increased production of leukocytes by the bone marrow, and production of acute phase proteins by the liver. At higher temperatures (during fever), bacterial and viral replication is less-efficient, whereas the adaptive immune response operates more efficiently.

They mediate septic shock by inducing fever and causing hypotension through vasodilatation and an increase in capillary permeability. Also, these cytokines activate the coagulation cascade causing disseminated intravascular coagulation resulting in anoxia of vital organs.

The balance of different CSFS is partially responsible for the proportion of different immune cell types produced, Some CSFs also promote further differentiation of cells outside the bone marrow, e.g. macrophage CSF (M-CSF) promotes the development of monocytes in blood and macrophages in tissues.

Transforming growth factor β (TGF-β) and IL 10 have an important role in the downregulation of the immune response, They are produced by regulatory T-cells. TGF-β & IL 10 have an anti-proliferative effect on many cells including B. T and NK cells and macrophages, They dampen or downregulate an overactive inflammatory response.

The term chemokine refers to a specific class of cytokines that mediates chemotaxis; they attract or induce leukocytes to migrate to areas of infection or tissue damage. Chemokines are produced by various cells in infected areas as endothelial cells and macrophages, e.g.,  IL-8.

Interferons (IFNS) are host-coded proteins (cytokine family) that are part of innate immunity, They are produced by intact animal or human cells in response to various inducers, as some viral components.

IFNS are considered the first line of defence against viral infections, They can provide a local rapid response that is often sufficient to control viral infection.

1. Anti-viral Action Type I interferons (INF-α and INF-β) mediate the early innate immune response to viral infections. Interferon itself is not a direct antiviral agent but it initiates an antiviral state in cells surrounding the infected ones via the following mechanism:

Interferons are host species-specific in function but are not specific to a given virus, Many viruses have mechanisms to evade or inhibit the INF response.

All interferon types of block cell proliferation at appropriate doses.

Both naturally induced and manufactured INF can trigger systemic symptoms, associated with many viral infections such as malaise, myalgia, chills, and fever, especially during viremia, That is why interferon therapy causes flu-like side effects.